Adam Smith, a Scottish economist, provided the philosophical foundation for Western Democracies via his well-accepted treatise, The Wealth of Nations which introduced the concept of the Invisible Hand[1]. In short, the concept is that greater society benefitted from each individual’s and entity’s pursuing their own interests (provided they pursue those interests in a lawful manner). For example, a farmer’s working harder to enhance the productivity of land by removing stones and tree stumps benefits the broader society by providing more food for the local village and beyond.

The Invisible Hand philosophy is in the process of being modified, and in some cases replaced by a yet to be properly named approach, but basically one whereby each production unit and in turn person is judged by the extent to which there is a more direct social benefit stemming from the activity. The most acute recent example of this is the energy industry whereby providing capital to such firms (either by lending or holding shares) has become anathema such that energy firms have difficulty launching new projects and production has suffered. The upshot appears to be a rise in energy prices. While many express concerns about the 50+%[2] rise of gasoline prices over the past year which has particularly impacted lower income levels, others might counter that the increased gasoline prices will accelerate a shift to less polluting electric vehicles and thereby provide a longer-term benefit.

Staying with the energy example, in a case which would have been unthinkable until recently, the UK’s Conservative government under Boris Johnson is considering a windfall tax on all energy companies as a result of the rise in energy prices. The action is particularly surprising as it was out of character for the Conservative Party. The action also begs the question of whether the UK government will rebate the energy firms if petroleum prices decline.

We are just beginning to come to terms which the impact of this shift in philosophy, but some issues are becoming evident. In the energy area, does one adopt the notion that all petroleum-related firms are baneful, or is it best to assume that petroleum will continue to be needed and therefore we should reward any reduction in carbon emission? Furthermore, what should be the basis of measurement?  Lastly, what can be done to make the incentives/ disincentives efficient and effective.

To provide our perspective, we believe there are shortcomings in the Invisible Hand philosophy and that adjustments are needed to capture the full costs related to various products and endeavors. Hopefully, we are thoughtful about the approach, so the opportunity is not squandered.

Another action which would have been unusual in the past is various governments’ taking actions against individuals connected to the Vladimir Putin government including seizing and freezing assets of these individuals. In the past, all people were deemed innocent until proven guilty, and these recent actions appear to ignore the normal safeguards. While cogent arguments can be made that this approach is needed to impede the greater harm from Putin’s actions, the actions are unusual, nonetheless. Add to the list the forced divestitures for those firms doing business in Russia. While the benefit of such actions might be minimal, in some cases, the forced selling is economically disastrous.

Typically, governments do not get directly involved in commercial matters. However, it appears that Western banks are prohibited from accepting sovereign bond payments from Russia and thereby precipitating a default. It will be interesting to see how the courts treat this situation when conditions return to normal.

The late Colin Powell encouraged commanders that if they were going to engage in conflict, they should enter with overwhelming force, or refrain from getting involved. In Ukraine, while there has been early success in Kiev and in the North, Ukraine appears to be slowly losing in the Donbas region and risks losing the port of Odessa. Furthermore, there is a strong possibility on an encirclement of numerous Ukraine fighters. Apparently, the issue is one of equipment whereby Russia is launching 20 shells for every one Ukraine shell.

We take solace in the recent rebound in the market, but the threat from the three Rs remains: rates, recession, and Russia. Providing some comfort is the expected easing of inflationary pressures: 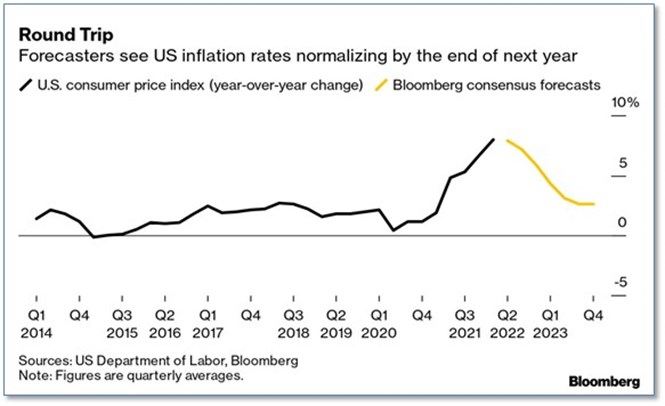 A final thought is that war economies are dependent on their treasury function and the costs of Russia’s exports transportation has greatly increased. 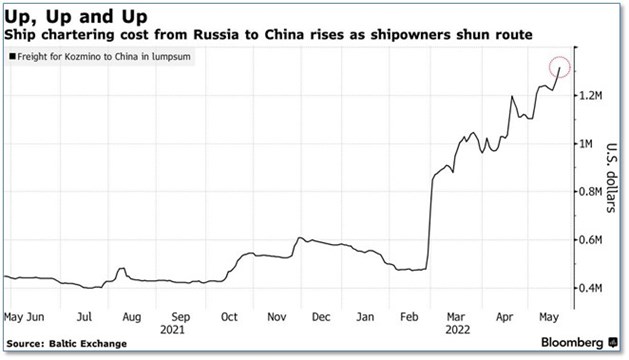