Russia and the West are in a desperate fight in Ukraine, a war which can best be described as a one-half proxy war. Typically, wars progress in a manner whereby both sides add resources in an effort to gain the upper hand, although this one is different in several respects. One is that Russia is going to great lengths to avoid defaulting on its sovereign debt, despite the fact that much of this debt is held by the West. Additionally, while threatening to use nuclear weapons, it has not, and probably will not, as the usage would be viewed as crossing an unspoken line and threaten Western Europe. The West is providing support in the form of weapons, but only certain types of weapons (i.e., no aircraft and limited tanks). Furthermore, NATO is allowing the passage of ships carrying Russian energy to India and China. Perhaps all parties are acting in a manner consistent with their aims:

Russia is doing its utmost to gain territory, close some of the major lanes for attacking Russia, and create a buffer to Russian territory. The war is depleting Russia’s forward sales of energy, but not to the point whereby Russia cannot support additional fighting.

Ukraine is pushing back on a belligerent foe in the hopes of expelling Russia and possibly regaining Crimea.

Germany & France are making relatively small contributions (compared to the US) while maintaining the flow of Russian energy.

Turkey is gaining currency and influence by the sale of its well-regarded, effective drone systems, a blockage of warships from the Black Sea, and as an arbiter of additional NATO members.

The United States appears to be focused on bleeding Russia and is providing sufficient support to Ukraine to allow it to continue to fight, but not the weaponry to allow Ukraine to win quickly. The US is probably heartened by the strengthening of NATO but nonplused by the tepid response of Germany and France.

While the outcome is far from certain, the cost of the continued conflict is massive and is likely to impoverish both Ukraine and Russia for decades.  Perhaps that is part of the broader plan and that is to hobble Russia and reduce the risk of future mischief. The global cost is inflationary pressures and likely food shortages. There is an adage that armies are typically prepared to fight the last war rather than the current war. Perhaps a corollary exists here whereby Putin is fighting to close the avenues for attacking Russia and recreating old USSR buffer zones, but at the cost of impoverishing and isolating his country. Perhaps in the twenty first century land is less important to a country’s overall welfare than other aspects such as education and a stable government.

Watching with interest is Xi who has expressed interest in re-unifying Taiwan. The weak results of the Russians in Ukraine is giving China pause from a military perspective and the sanctions and dis-engagement of many Western companies will have long-lasting effects. The lockdowns are expected to be lifted over the next week, but have hurt productivity.

The governments of nearly every Western nation have been pushing the notion of ESG in the finance section under the assumption that financial markets have a responsibility to encourage investment in those endeavors which aid society beyond that provided by Adam’s Smith’s invisible hand (i.e., each individual’s and entity’s seeking profit aids overall society). While ESG has gained broad acceptance, the area remains immature and is having some growing pains. First, there is the issue of “greenwashing”, whereby a firm appears to be undertaking projects which reduce carbon emissions or provide some other benefit, but in reality, provide minimal benefit. Second, there is the issue of measurement itself; is it sufficient to account for the direct carbon emissions of the target company, or is it appropriate to take measurements for the full cycle of usage, from sub-suppliers, suppliers, users, and disposers and the emissions at each stage of the process. Lastly, there is the issue of weighting. Ever-vocal Elon Musk commented that a recent ESG scoring of TESLA below Exxon provided an indication that the process was bogus (the term used was “scam”), thereby echoing the sentiments express by senior officials in the state of Utah.

Our assessment is that ESG is here to stay but that more work is needed for consistency of approaches and understanding.

Markets have been on edge over the past several weeks based on concerns regarding inflation, rising interest rates, and the War probably in that order. The irony is that as of two years ago, Western central banks were hoping that inflation would rise to 2% and that there were general concerns regarding deflation. From our perspective, we have seen inflation at these levels before, and it is manageable, and the same holds for interest rates, and wars. The angst is experienced in the adjustment period, and that is exactly what we are experiencing currently. The below chart indicates a possible tempering of inflation expectations: 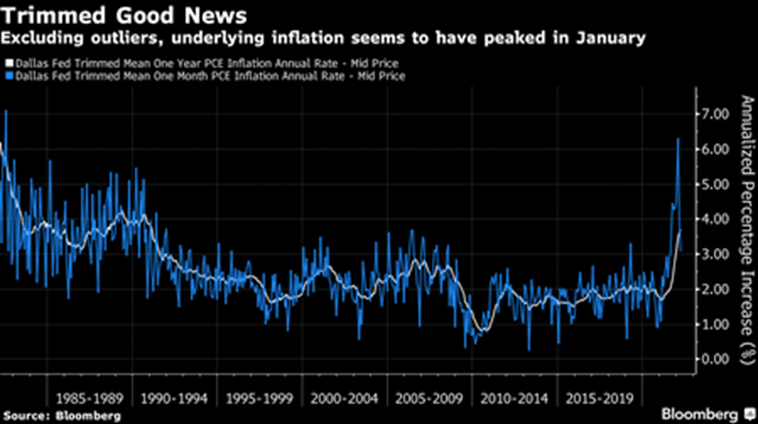 Regarding adjustments, below are a few of the major items which will need attention over the next couple of years:

Russian Energy Exports - Western Europe is dependent on Russian energy and is having difficulty finding suitable alternatives; both Germany and France have pulled away from coal and the typical green energy sources are insufficient to fill the gap. Meanwhile, Russia is not realizing anywhere close to market prices for its energy because of the sanctions.

Food, Raw Materials, and Energy – the disruptions caused by the Ukraine War has placed pressure on the global supply of food (and food inputs such as fertilizer), raw materials, and energy. Meanwhile frackers have not stepped up and the US is courting pariah states such as Venezuela in an attempt to encourage greater production.

Supply Chain Issues – the lockdowns in China have further stressed the global supply chain, with the result that many firms are re-thinking the locations particularly given the rapid imposition of sanctions on Russia.

Exchange Rates – the Euro, Yen, and Yuan have been under pressure as the ECB, BOJ, and BOC have not raised rates while the US has.