The purpose of this publication is to address those items that are likely to have the greatest impact on institutional investor risk managers. Our aim is to explain underlying causes for recent developments and where possible, predict likely outcomes.

The Old Lady of Threadneedle Street Responds in a Pinch

Central Banks periodically are forced to save politicians and wayward asset managers from themselves. The Bank of England was forced to cover for the foibles of the Tory government with its leadership switches, from Boris Johnston to Liz Truss to Rishi Sunak and for the pension funds and their ill-fated trades; pension funds invested in derivatives pledging as collateral gilts, which prompted margin calls as they declined in value. 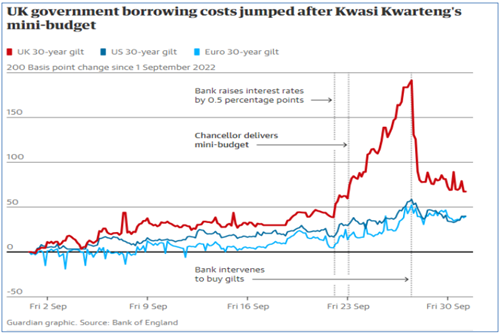 The government’s tax cut proposal sent short-term rates past 5%, froze the home loan market, and threatened business credit lending. In response, the BOE suspended its gilt selling and instead announced it would purchase up to 65B pounds over the following two weeks. (Note, with the purchases, BOE is easing while most other central banks are tightening.)

While the actions are sobering, in our view, unfortunately, there is an underlying problem without which, the chaos might never would have occurred. As can be seen in the appendix, the UK’s credit quality is experiencing challenges, thereby exacerbating its current troubles. With the weakening economic conditions globally and especially in Europe, it is questionable whether the fundamentals will improve in the near future. Egan-Jones’s ratings for the U.K. have been and remain below those of the other major credit rating firms’ ratings.

The best description we can obtain for conditions in Ukraine is a quagmire. While Ukraine is slowly regaining territory, it is coming at a massive cost to its population and infrastructure. Meanwhile, Putin does not appear capable of winning against the determined, well-equipped Ukraine soldiers. Like many wars, the exuberance at the start is rapidly replaced with a stark, foreboding fight for survival. Meanwhile Ukraine is dependent on outside forces for funding and support. Unfortunately, those outside forces are reluctant to provide Ukraine with the full support needed to quickly win the war for fear of enraging Russia and an escalation of the conflict. Hence, the fight continues with modest gains by Ukraine. On the positive side is the moderation of natural gas prices in Europe. As can be seen, prices have collapsed over the past several months, the result of warm weather and aggressive sourcing (storage facilities are nearly full). 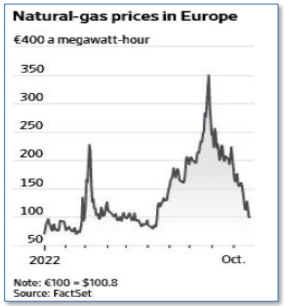 On the negative side is the likely shift in control of the US House of Representatives as the Republicans are less likely to support Ukraine War expenditures. Even if the war stopped today, the debt from the support provided and the cost of rebuilding is likely to be massive.

China sent markets into a tizzy over the past couple of quarters with the collapse of the real estate sector, the covid lockdowns, and now a de facto crowning of Xi with his shift from a growth to security focus. The mind set under Deng used to be black cat or white cat as long as it catches mice (i.e., a deemphasis on Communist doctrine), to one which emphasizes increased control of the population and a possible invasion of Taiwan.

China’s saber rattling appears to be hurting the economy as suppliers are either shifting manufacturing back to the States or to more palatable locales (i.e., Mexico, Vietnam, and the Philippines). Two disturbing recent developments are the possible over-counting of China’s population and GDP. On the GDP front, Professor Louis Martinez of the University of Chicago contends that GDP has been substantially overstated, which when compared to its GDP , results in the below chart (source: https://www.youtube.com/watch?v=A5A5Eu0ra3I&t=745s). Providing further discomfort is the portion of GDP devoted to housing and infrastructure which is likely unsustainable and, in many cases, (particularly housing), might be wasted. The concern is that China might be forced to retrench in a manner similar to Japan in its lost decades. 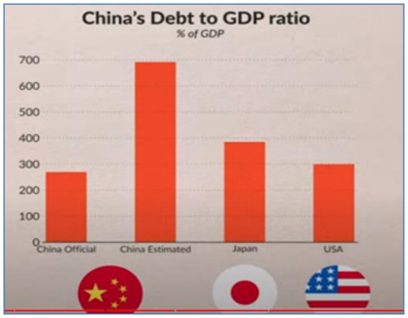 Most polls have the Republicans retaking the House and some the Senate (based on recent results, it appears there is a built-in bias among pollsters for Democrats and therefore the losses might be greater than predicted). Regardless, President Biden is likely to be thwarted with much of his agenda as the Republicans act in a manner maximizing their chances of retaking the White House in 2024. The upshot is likely to be Washington paralysis and a rolling back of many of Biden’s major initiatives. Another interesting development to watch is whether President Biden will run in 2024. While it is clear that age will be an issue, there is no clear electable alternative with Harris polling weakly and Warren being a bit left compared to typical candidates. However, we expect a shifting as time progresses and there will be several viable candidates including a possibly re-energized President Biden, and recalibration by Harris and Warren.

Waiting for an Easing of Inflationary Pressures

In terms of impact on the market over the past year, inflation is either at the top of the list or close to it. As of a year ago, FED officials expected inflation to be transitory, but it appears stubbornly resilient despite the 225-basis point rise in FED funds rates. (The irony is that prior to the past 18 months, inflation had been stubbornly stuck well below the 2% target set by the FED and other central banks.) While it is too early to identify exactly what has sparked inflation, our suspicion is the loose fiscal policy and the massive spending on supporting the Ukraine war. Yes, the tighter monetary policy with the reversal of QE has helped but has been overwhelmed by fiscal policy. When fighting wars, the monetary cost often is a secondary consideration compared to success on the battlefield. However, if the “peace dividend” is real, then there must be a negative corollary. Let’s call it the “war tax”. While hard to measure, it is none-the-less real and expensive. Consider for a moment the cost of those wonderfully effective HIMAR missiles at $110K each , rockets used in U.S. guided missile systems cost $150,000 each, and a guided Excalibur shell is around $68,000. Adding in a few additional expenses such as the multitude of additional equipment, troop training, direct financial aid, humanitarian aid, and the eventual rebuilding costs, we are probably north of a few trillion dollars. (By the way, any government official who mentioned a number this high would probably be banished.) Bear in mind that few if any of these expenditures contribute to enhancing the productivity of society.

For those wishing to do more research, perhaps the Vietnam War period (i.e., the late 1960s and early 1970s) provide a good example of relatively recent wartime inflationary pressures.