While change is difficult and often painful, it is needed for maintaining balance. Institutional Risk Managers are normally best served by anticipating and adjusting to changes of which there are many.

Global economies are adjusting to major shifts in energy consumption and energy supply which are rapidly shifting. A showdown is emerging in Europe as Putin is curtailing natural gas and petroleum supplies in an effort to end Europe’s support for Ukraine. From Putin’s perspective, while Europe is certainly a factor, the main protagonist is the U.S., and to a lesser extent, the U.K., although there are few ready levers to force restraint of the U.S. and U.K. Meanwhile, energy prices are spiking throughout Europe as illustrated below: 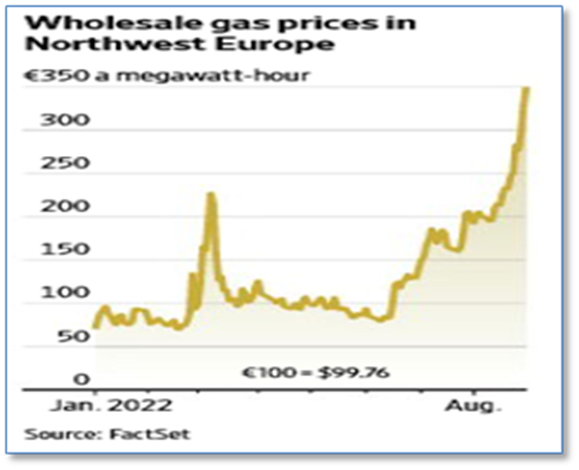 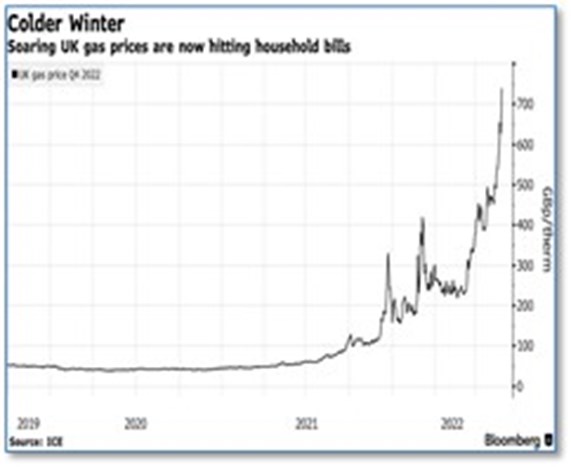 In comparison to Europe and Asia, the rise in natural gas prices in the U.S. have been more tempered:

While economists argue about the true causes of inflation (we are in the Steve Hanke camp – see WSJ editorials), the fact is that it is here and is causing pain for many businesses. While there is evidence that the severity of price increases is likely to temper over time, one can expect levels greater than those experienced over the past 20 years.

On the currency front, there is a major sea change with the euro reaching parity with the dollar and with most currencies, a development last seen prior to 2003 (source: Macrotrends):

In terms of the underlying causes of the decline in the euro, two major factors are the discrepancy in interest rates between the U.S. and E.S. (the ECB has increased rates, but not to the extent the FED has) and the divergence in energy costs illustrated above. Another factor is the major war on the E.U.’s Eastern border. Lastly, the E.U. has some countries which simply cannot afford a material increase in funding costs. The below chart reflects some of that concern:

While many institutional investors like to stay away from politics, the fact is that politics often determine the environment in which we are investing. With the Midterm elections a few months away, politics are driving decisions and few if any appear concerned about deficits or debt. A cynic (and perhaps a realist) might state the prime reason for the recent student loan forgiveness is an attempt to address the demands of the Progressives. Regardless, the action might be the right move politically, but the costs are likely to be far higher than projected. Continuing with politics, despite the departure of Mr. Trump from the White House nearly two years ago, it appears to serve both his and the current administration’s interest for Mr. Trumps regularly appearances. A question is whether it helps politically. As usual, the answer is at the margin: did a front-page raid sway the independents. Time will tell, but our suspicion is that most voters have made up their mind and that additional efforts might be unproductive.

Another comment on the political front is on the push-back on ESG matters led by Florida governor Ron DeSantis. Our view is that it is helpful to question the costs and effectiveness of proposed programs, but the groundswell for ESG policies is hard to overcome at the institutional level. For individuals, they might choose for programs which enhance their savings rather than those focused on broader societal benefits, but individuals are typically absent in proxy votes.

A final comment on the political side is defense spending. While we are not at war with any country currently, defense spending continues. Ignoring any judgement on involvement in the Ukraine war, the fact is there are significant direct and indirect costs for both sides both during the war and any rebuilding period. Since none of these expenditures enhance the wealth or productivity of the affected countries, it is bound to factor into current and prospective inflation.

On the positive side, while many bemoan the poor state of the world, there are numerous examples of leaders taking a measured approach to the benefit of all. The latest example is China and the SEC working out a system whereby the books of US-listed Chinese companies can be inspected in Hong Kong. Another is the measured response of China in response to Ms. Pelosi’s recent visit. Lastly, to the credit of both Ukraine and Russia, war rages, but it could have been rapidly escalated and expanded.

Perhaps it is worthwhile to take measure. Despite the many problems over the past 100 years, betting on the economy has made a favorable bet:

Further support is from the below headline: KKR Sees ‘Golden’ Chance to Snap Up Risky Debt Amid Market Chaos[2]. Our view is as usual challenges remain, but intelligent, informed risk managers will prevail.