While few think about it, the prices we pay for goods and services are a reflection of the overall currency levels.  When those currency levels are inflated, a natural outcome is that the prices of goods and services similarly increase. The key from a risk perspective, is not only accurately assessing the current situation and the underlying drivers, but also analyzing the likely persistence, and developing a cogent response.

The current state of monetary and fiscal affairs can probably best be traced to the 2008 credit crisis whereby the then Fed chairperson, Ben Bernanke, stated that he would drop money from helicopters (hence the term “Helicopter Ben”) in an effort to stimulate the economy. Stimulate the Fed did, with a total of 17 programs crafted by Bernanke and Paulson to place the full weight of the U.S. Government behind the markets. Hence the early 2020 credit crisis was just getting started, before it ended courtesy of the massive stimulus provided by the Fed. Not to be outdone, Congress weighed in with its own stimulus programs, providing funding to the point that people were reportedly being paid more to not work than to work. So, after years of the central banks worrying about the lack of inflation, now they have it in spades; home prices are up an average of 15%, gasoline prices up over 50% over the past year, natural gas prices up over 80%, and employers are having difficulty finding qualified employees.

While it is likely that some of these increases will be tempered over time, concerns remain. The below graphs from FRED provide useful reference points. Federal Reserve Economic Data (“FRED”) is an online database consisting of hundreds of thousands of economic data time series from scores of national, international, public, and private sources. FRED is created and maintained by the Research Department at the Federal Reserve Bank of St. Louis. While attention is naturally placed on our domestic market, unfortunately, the description fits many other developed countries.

As can be seen from Figure I, the Total Assets of the Central Bank has increased from slightly over $4T as of early 2020 to approximately $8.5T currently. Per Lawrence Goodman of the Center for Financial Stability, “Fed purchases of Treasury debt have funded as much as 60% to 80% of the entire government borrowing requirement. In other words, Fed actions have crowded out private- sector price discovery for more than 10 years, pushing yields to lows and stock prices to record highs.”

The below figures represent the fiscal side; as can be seen, there has been a significant increase in fiscal stimulus. 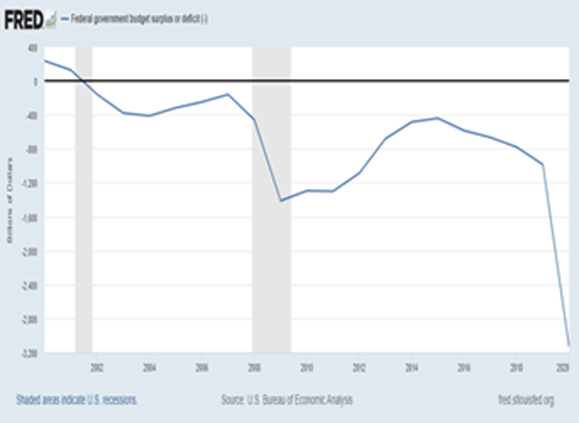 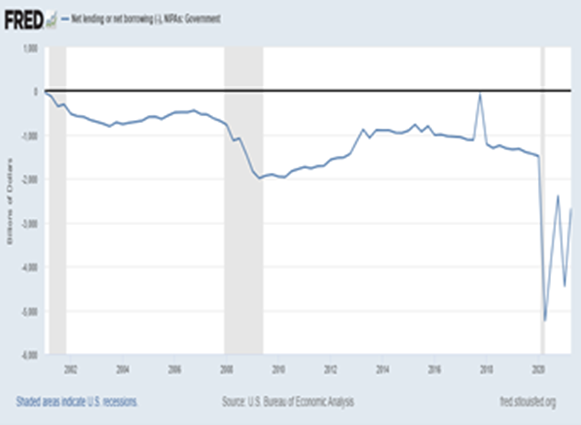 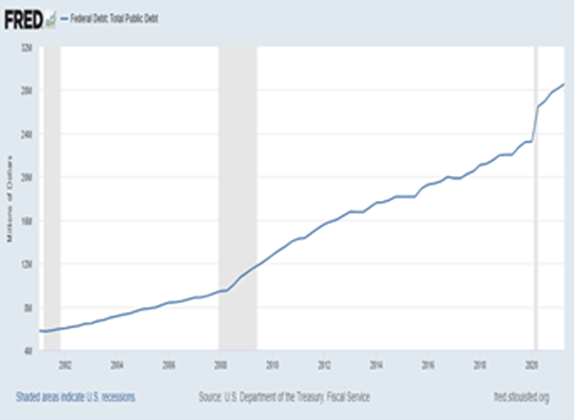 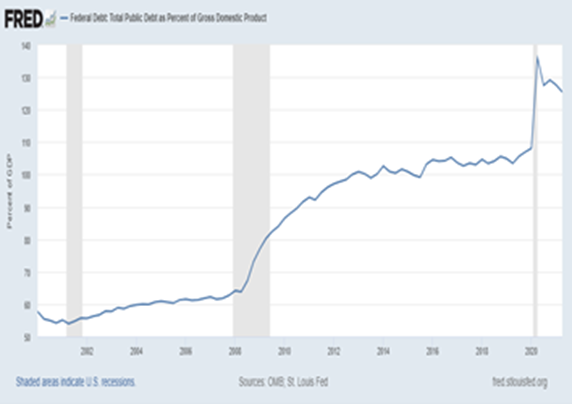 Fed chair William McChesney Martin’s adage was that the job of the Fed was to take away the punch bowl just as the party was getting started. For better or worse, that is not happening and appears increasingly unlikely to happen. Memories on Wall Street and in Washington are short, and few remember or studied the trials and travails of the late Paul Volcker who was brought in to tame unchecked inflation. Times were different then in the sense that the Fed was not engaged in making major purchases of Treasuries, thereby depressing interest rates. Hence, one could cogently argue that the current 10 year bellwether is false and that without the purchases, interest would be significantly north of the current 1.59%. Using the traditional rule of thumb that the risk-free rate (i.e., Treasuries) should match inflation, the rate on the 10 year should be at least at the 4.5% level. This means that most bonds do not yield more than the Consumer Price Index (CPI) rate of inflation, 6.2%, which is the highest rate of CPI Inflation in 31 years. Neither do most yield more than the Producer Price Index (PPI) rate of inflation, 8.6%, which is the highest rate since statistics have been taken. While many, including the Fed, are arguing that inflation is transitory, and a reflection of the re-opening of the market post-COVID, that argument is quickly waning, and what we are left with is the question of how high and how long. An element that is worrisome to traditionalists is the notion that the Fed should add to its current responsibilities, economic equity. While difficult to define, the author’s assumption is that it would likely be a continuation of the two punchbowls.

So where does that leave us. While predicting the future is always dicey, our base case is more or less a continuation of the same. Hence, Treasury rates will be less than inflation and the monetary and fiscal stimulus, while partially easing, will remain at elevated levels. The Perdition issue comes in managing the attenuated circumstances; managing is far more difficult when the margin for error is narrower.

While identifying safe harbors might be elusive, there are a few characteristics. At the head of the list is probably pricing power. Unfortunately, the attractive industries such as software are already trading at elevated multiples.

On the fixed income side the absence of yield to match inflation is causing angst. On the flip side, a material increase in interest rates will be difficult for many debtors to absorb. 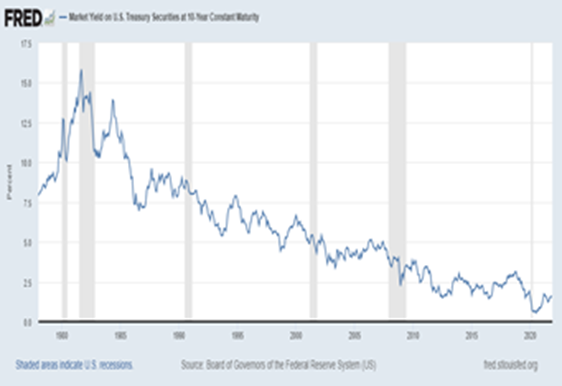 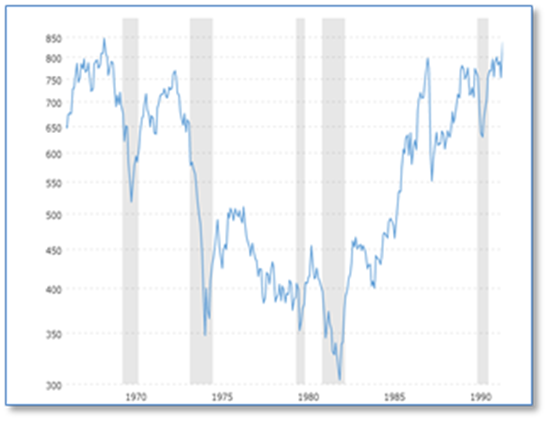 Unfortunately, during periods of high interest rates, there are few safe harbors; the S&P 500 Index was halved as can be seen in the above Figure VIII during 1975 to 1982 and the yield on many other instruments is subpar. Perhaps Milton Friedman’s adage regarding “No Free Lunch” is accurate. To provide some perspective, this is not the first occurrence of negative real interest rates, as illustrated by the below chart. 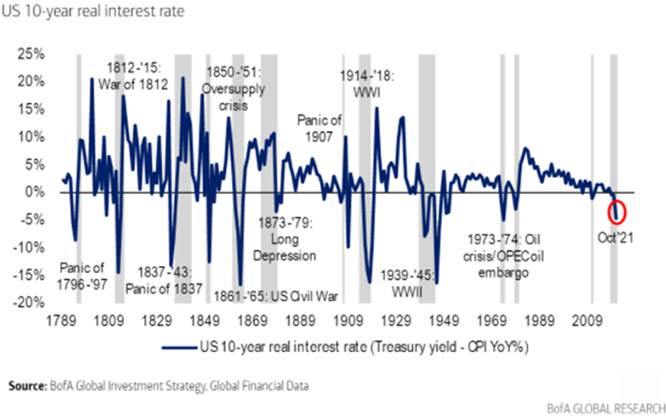