While it is often difficult to view events from the perspective of an adversary, as sophisticated investors and professional risk managers know, accurate thinking is critical. The challenges of the day are numerous, but for many, at the top of the list is the Ukrainian War, inflation, and economic conditions which in many ways are all related. This latest installment aims to provide a greater understanding of some of these issues, and hopefully, help our readers navigate troubled waters. The purpose of this installment is NOT to justify actions which many view as reprehensible, but rather to explain some of the likely thinking behind them and more importantly, enhance understanding and prediction of future actions.

The Western World is aghast that after nearly 75 years of peace in Europe, Russia would break that peace by invading Ukraine. Applying a Machiavellian lens to Putin’s actions, they are perfectly rational and reasonable. Russia has been invaded countless times and Putin apparently believes Russia was under an existential threat with a NATO-supported country on its border. (The pro-Russian government under President Yanukovych was replaced in 2014). Apparently, Putin did the rational thing which was to secure the support of the other global power, China along with possibly India, and after a display of power via a build-up near the border, invaded Ukraine. The hope was a repeat of the acquisition of Crimea in 2014.

While a three-day expedition was the plan, the reality was more far more problematic. Russia is now in a protracted war fighting a determined and apparently well-supplied local army, which might swell to 2M men in the coming months (Ukraine had a population of 40M). Meanwhile, Sweden and Finland are considering NATO membership, Germany has upped its Defense budget, and Russia has a slew of sanctions hampering its economy. While the U.S. and NATO might not be directly involved in the conflict, there is little doubt that collectively they are doing much to aid Ukraine in its fight. The U.S. State Dept. has publicly stated that it hopes to deplete Russia’s military capacity by aiding Ukraine.

If one considers currency to be notes against a country’s treasury (which is exactly what is printed on each bill), then the creation of additional currency at a rate in excess of the growth of the economy should produce inflation. (Appendix I below supports that notion).  Without passing judgment on the wisdom of the approach, since the COVID crisis (and one could argue well before that crisis), debt of many of the Western nations has risen faster than GDP growth. We have addressed the level of inflation in prior installments and are likely to return to it, but as measured by both the CPI and PPI, inflation is running at relatively high levels. While Congress conducts vigorous debates about various programs, spending on defense exceeds $700B[1].

Now for the “S” word – with the latest U.S. print of -1.4% for first quarter GDP, there is little doubt that stagflation has returned. The fear is that the cycle will become self-reinforcing whereby people become discouraged by their declining purchasing power and the increased costs for basic goods such as food, energy, and housing.

The below Figure I indicates that for the last couple of months, the FED has begun modest reductions in its balance sheet thereby making less funding available to the market. 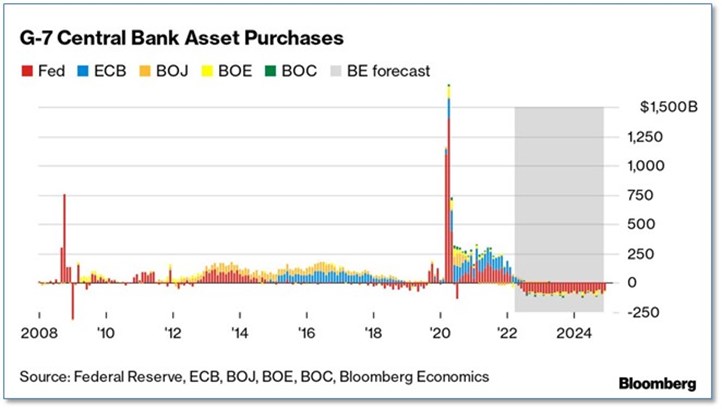 The major risks currently facing the developed world are an escalation of the Ukraine War (including a limited nuclear strike), an attack on Taiwan, and a massive tightening by the FED. Regarding Ukraine, despite the massive price being paid in terms of human suffering and resources, the major participants do not appear ready to enter into serious peace negotiations. However, with the exception of a few major wars, most end within months and we expect that all parties will negotiate seriously in the next couple of months and with it bring the normal post-conflict bounce. Regarding inflation, while the current cast of government leaders and central bankers appear to have little concern about deficits and currency expansion, we expect that will change as voters express their concerns in the next election cycle.  On the inflation front, Figure II below provides some comfort. 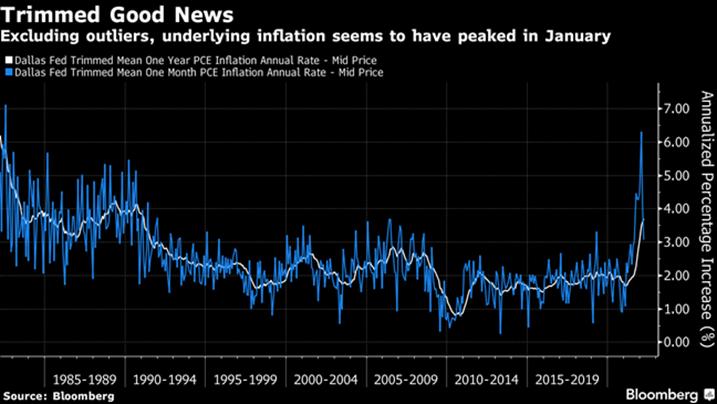 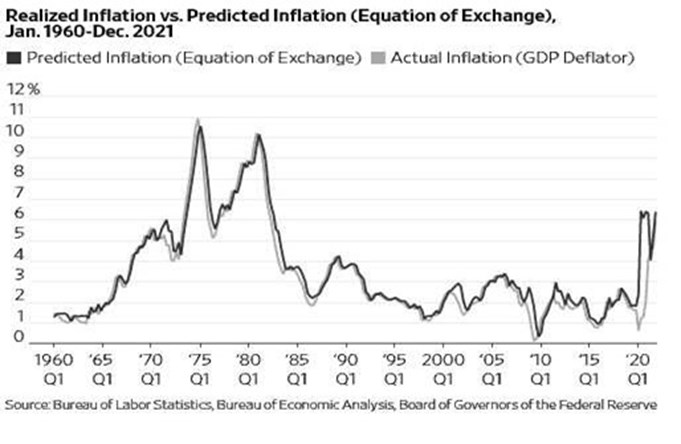