A key task for sophisticated risk managers is anticipating market developments and their impact on investments. While it is easy to be a perpetual pessimist, a more productive stance is one that considers a likely range of outcomes.

The premise of Modern Monetary Theory (MMT) is that deficits are irrelevant since governments can print currency to cover their debt. Japan has tested MMT by producing the highest recorded debt to GDP among the major developed countries.

However, the accuracy of reported figures is questionable. Some speculate China over-reports GDP and under-reports debt. Notably, some Chinese real estate developers have misreported financials.

Those countries that increased money supply faster than GDP historically have faced inflation. The Weimer Republic, Zimbabwe, Turkey, and some Latin American countries are examples. However, Japan as illustrated in the below graph, has recorded modest inflation. 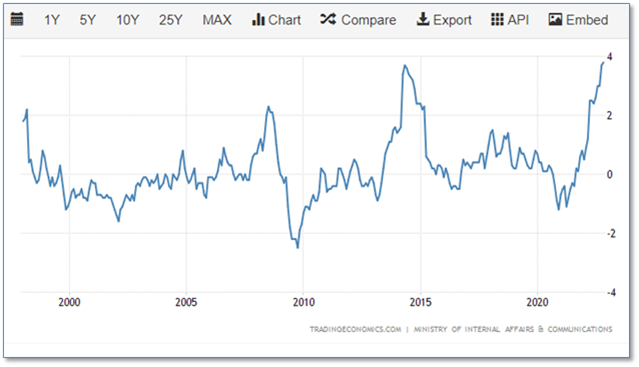 While Japan has dodged the inflation bullet, the Japanese “Lost Decade” has become three lost decades. Currently, Japan’s debt to GDP is near 266%.

As of September 2022, the Japanese public debt is estimated to be approximately 9.2 trillion US Dollars, or 266% of GDP, and is the highest of any developed nation. 43.3% of this debt is held by the Bank of Japan. [2]

All else being equal, a 1% increase in Japan’s funding cost would cost 12.8T yen and increase its deficit from 48T yen to approximately 60T yen. An indication of the sorry situation is the portion Japanese debt service as a percentage of tax revenues which as of 2010 was at 60%! (Including more current data, the portion is much higher.) Figure 3 indicates an approximately 40% decline in the value of the yen over the past 10 years. 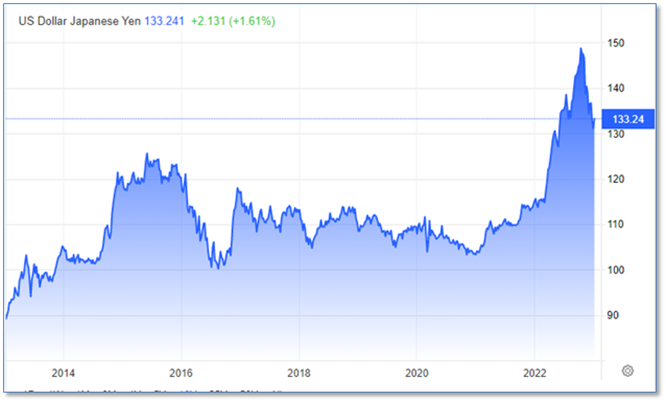 There was a sea change recently with the Bank of Japan (BOJ). They announced a 50-basis point increase in the targeted rate for Japanese 10-year treasuries. Since like most countries, the 10-year treasury is a pricing benchmark, the action reverberated through the market. A flurry of foreign exchange options trades occurred, as the market looked for protection against downward moves in the yen/dollar spot rate. The rate fell from 136.91 on December 19 to 132.33 the following day, after the announcement that the central bank would adjust its long-standing yield curve control measure – an indication that a rate rise might be on its way.

Regarding the timing, our assumption is that Japan needed to act because of the increased disparity between its depressed rates and the other central bank rates which increased recently in response to inflationary threats.

Regarding the outlook, rarely is there one event that triggers the market collapse of a major country. We do not expect one here, but it is worthwhile to consider possibilities. Japan’s debt restricts its options at a time when it needs optionality. It is unclear if Japan will be able to continue to repay debt and creditors will continue to accept IOUs. The words of Mr. Hemingway come to mind:

“How did you go bankrupt?"
Two ways. Gradually, then suddenly.”

Since January 1, 2023, protection and indemnity (P&I) clubs American, North, UK, and West are no longer able to offer war risk coverage across Russia, Ukraine, and Belarus. The clubs cover ~90% of the world’s ocean-going ships. Russian vessel-based oil exports will likely reduce dramatically from ~3M barrels per day, valued at ~$240M. 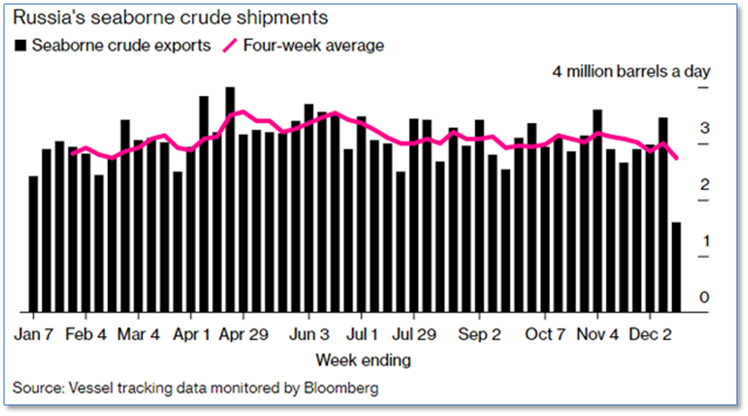 India and China, major importers of Russian oil, will likely also be impacted. Without Western insurance, transportation must be addressed partially by the “shadow fleet.” These are older tankers with opaque ownership that do not transact in dollars or use Western insurance. The shadow fleet has grown over recent years to carry sanctioned Iranian and Venezuelan oil to China. It is unclear if there is sufficient shadow-fleet capacity to handle the full load.

Of course, the objective of the actions is to pressure Russia into ending its war with Ukraine, but we have doubts that the sanctions will be effective. Mr. Putin appears unlikely to end the conflict until he is successful, runs out of resources, or is deposed.

The ESG movement has gathered momentum over the past decade and now is at the heart of many investors’ evaluations process. However, Republican state governments have rejected much of the ESG movement. Recently, Florida fired BlackRock based on its ESG activism. Those groups rejecting ESG investment criteria consider that energy availability and affordability are important. We doubt that ESG adherents will make any material adjustments. Therefore, this issue is likely to be a major source of friction for years to come.

Meanwhile, fund managers are having difficulty in meeting ESG-true criteria:

Fund managers decry "chaos" of SFDR designations
Fund managers are voicing discontent with the new classifications of environmental, social and governance-focused funds required by the EU's Sustainable Finance Disclosure Regulation. The strict credentials needed to qualify as an Article 9 fund have prompted a scramble to downgrade an estimated $125 billion worth of funds to the less stringent Article 8 bracket. With managers complaining that the exercise is confusing and costly, EU regulators have indicated they may need to review the issue. [5]

Despite concerns over greenwashing and heightened politicization of ESG-focused investing, ESG fund inflows held up well during 2022. Sustainable funds saw $22.5 billion of net global inflows in the third quarter, down from $33.9 billion in Q2, but better than the broader funds market, which saw net outflows of $198 billion. [7]