Inflation and elevated interest rates have been major factors driving the market over the past 12+ months. (The irony is that as of 24 months ago, central bankers were hard-pressed to stoke any sort of inflation.) Our view is that the war in Ukraine is reaching a critical point with the possibility of Ukraine retaking Crimea, thereby prompting Russia to reconsider the benefit of their involvement, a restoration of energy flows to Western Europe, a moderation of inflation, and with it, a moderation of some interest rates.

Russia exited the Kherson region after Ukraine restricted Russian supply lines. Likewise, Ukraine might also take Crimea and thereby force the question of any benefit Russia had hoped from the war. As can be seen below, if Ukraine is able to sever rail lines, Russia will have extreme difficulty in providing the food, weapons, and supplies to troops in the region. Supply via vessels is unlikely because of the severe losses Russia has suffered to date as a result of missiles and drones . Hence, if Ukraine is able to sever supply lines in the highlighted area below, which based on resent experience appears possible, Russia is likely to exit and the end of the war might be in sight. However, if the war lasts until early summer, Russia is likely to have 500K troops on the ground and Ukraine will have a massive number of weapons. With any ending of the war, inflation is likely to ease, the slow rebuilding will begin, interest rates might moderate, and the dollar might lose some of its recent strength. 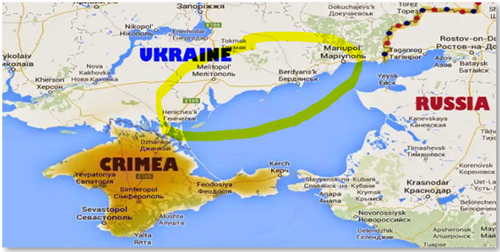 With every failure comes lessons, and perhaps the larger, rapid failures carry with them larger lessons. The items which should have been red flags are the following:

The crypto currency created by FTX, FTT was just that, created from thin air with little inherent value beyond the acceptance from the market. In fact, there is a bit of a shell game that emerged since initially FTT was reportedly traded among related parties on leverage with significant portions untraded. While information is still emerging, it appears that there were few controls over the creation of additional currency.

FTX was a broker, and yet it appears that FTX did not segregate and safeguard customer funds but rather used such funds for investments which for the most part appeared to have failed. A good portion of the funds were transferred or loaned to a related party Alameda Research which appears to be insolvent.

A good portion of the funds (either directly or indirectly) appeared to have been used to support the currency FTT itself, a failing trade which was the equivalent of throwing good money after bad.

FTX was able to secure endorsements and support by appearing to be focused on honorable intentions (“Effective Altruism”), thereby blinding the normal skepticism which should have existed. Contributions to the media and politicians helped to create a positive aura.

FTX was based in the Bahamas and appears to have lacked even the most basic accounting procedures and controls expected of a significant brokerage firm.

The list will probably grow with the emergence of additional information, but any one of the above items was sufficient to tank the firm. (We did not follow FTX but nonetheless, like to make a practice of understanding and anticipating shifts in credit quality.)

With power comes responsibility, and the second item appears to be lacking in the minds of many Chinese citizens lately. Protests have grown with the continued COVID lockdowns and increased control of the population via a social scoring system based on purchase records and social activities; presumably heavy spending and activity in areas out of favor is likely to result in a restriction on career and future social opportunities such as travel. The catalyst for the protests appears to have been the lockdown of a building which subsequently caught fire with the result being multiple deaths. Street protests have emerged and we expect China to use an approach which is similar to that used in Hong Kong. Time will tell, but it is clear that shifts in the supply lines away from China and the lockdowns have impacted the economy. An issue we are watching is the true size of the GDP relative to the country’s direct and indirect debt (see our early Nov. report).

We have covered sovereign ratings since 2009 and have been fortunate in making prescient calls. Currently, the UK (see below) and Japan look to be out of place but it is interesting to compare ratings with CDS spreads. The largest anomaly currently appears to be Brazil, which although rated higher than Greece, has a CDS trading much wider. While the election of Lulu is likely to be a negative, the bull market in energy and agricultural products might be offsets. 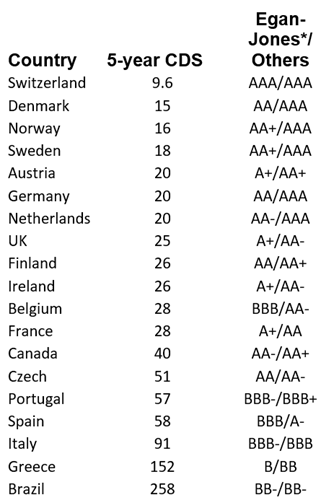 Companies and countries experience cycles, with the United Kingdom being no different. The engine which established the UK’s supremacy was early adoption of the industrial revolution, and a subsequent utilization of its technological superiority to establish a global trading network. For history buffs, a few inflection points were:

While England retains many strengths and remains a valuable ally, its economy has not kept pace with the increase in debt, with the result being a possible weakening in credit quality. The UK has a median rating near AA- while Egan-Jones’s rating is A+.[1] Below is information from our Aug. 2022 sovereign report available via our website. The Debt to GDP and the continued deficits are materially higher than those indicated in benchmark levels for the AA- or A+ levels.

[2] Sovereign credit ratings issued by Egan-Jones are not issued or maintained by the firm in its capacity as an NRSRO.