The Mafia and Mattresses; The Basis for Heightened Conflict  (Aug 2022)

The Mafia and Mattresses; The Basis for Heightened Conflict

The Mafia has a term for warring between different families and that is “Going to the Mattresses”, presumably because when battle is underway, the soldiers might be needed at any time and therefore place on hold their normal family lives. The root cause of the war is typically an attempt for one gang to enhance its activities at the expense of another. Domestically, there appears to be little in the form of mafia violence with most remembering it via Mario Puzo’s masterpiece “The Godfather”. While the film is great entertainment, an obvious message to the audience is that wars have massive costs and uncertain outcomes. Perhaps there is a corollary in the investment climate today.

Countless billions have been spent in Ukraine in an effort to blunt Putin’s invasion. While the drive to Kiev was broken, it is not clear that Ukraine is winning and in fact, appears to be losing with the slow, grinding gains of Russia in the East. For those who have not paid attention, the bigger loss is the fractured relationship between Western Europe and Russia. Courtesy of Angela Merkle, the arrangement was that Russia would provide energy and Western Europe cash. That partnership is asunder resulting in losses on both sides.

The problem with fractured relationships is that it is difficult to repair them. Putin has been demonized for his prior and current actions with many claiming that he should be bloodied or he will advance on other eastern European countries. While possibly true, the current situation is no doubt a mess and perhaps there was a better way.

It is natural for humans to seek to accomplish something, and Xi Jinping appears to be set on unifying China. After absorbing Hong Kong, it appears that Taiwan is next although the obstacles are significantly greater. In terms of the Western world’s response, there are two mindsets: one is to push back or Xi will continue to gain control over other territories. The other is a form of détente, whereby the U.S. remains ambiguous regarding its response. While China has been weakened by over-investment in housing and COVID shutdowns, perhaps that weakness encourages a precipitous response. While not mentioned, the mixed messages from Washington have further confused the situation.

The current administration campaigned on the message of being a great unifier with a return to normality. While such a message resonated, particularly after the chaotic years of the prior administration, it is difficult to describe the current environment as normal. In fact, the executive branch has set a blistering pace for change presumably to impress the Progressives of the party that a reset is underway. Some claim that the midterms will result in a rebalancing of Washington, but with the low relative level of funding for the Republicans, the Democrat's Senate control is likely to remain, and the House control is uncertain.

The West has always been arid, but the current spat of drought, fires, and snowpack melting bring a new sense of urgency. Our view is that there will be an increase of calls over the coming years for solutions and that a massive infrastructure project will be undertaken drawing water from the Platte River and connecting it to the Colorado River.

Many economists are having difficulty providing predictions because employment levels have remained high while GDP has weakened. Adding to the conundrum are the heightened levels of inflation. Our view is that global trade is resetting and that the tools and understanding will follow in time. The below chart provides some hope on the inflation front: 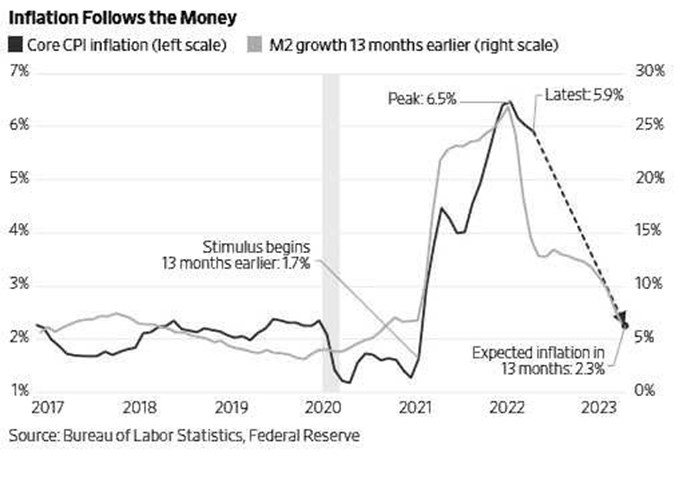 While some can bemoan the current turmoil in the global market, our view is rather optimistic. We will get through the Ukraine crisis with a negotiated peace whereby some territory is lost, but with the offset being greater protection for Ukraine and a sharing of the rebuilding costs. In the case of China and Taiwan, perhaps the view is that the saber rattling is no ones’ interest and normalcy will prevail.  For Washington, perhaps the stridency and polarization will ease, and the country will become more focused on accommodation. The best investments are made during the times of greatest uncertainty (cit. Baron Rothschild’s blood running in the streets)[1].  Perhaps now is one of those times.