Taking Measure of the Major Risks, Probabilities and Possible Impact

It is incumbent upon risk managers to be knowledgeable of the major risk factors, the drivers of those risks, the likely outcomes, and probabilities. We review these factors on a semi-annual basis to provide at a high level, some of the challenges and possible impact. While alarmist headlines gather significant attention and the research area is well-populated with alarmists, our bent is to provide a measured view in an aim to be most helpful to our readers.

While there is little doubt that the risks and challenges are many, our view is that a melt-down is extremely unlikely given the markets’ tendency to self-correct and the enhanced power of the central banks. A major private debt investor mentioned last week that their business was up over 50% year to date and that they viewed the current environment as akin to a “Goldilocks” environment; despite the negative headlines, structures and equity cushions had improved, portfolio company results were strong, and because of the increase in interest rates, yields were improved.

In this installment we address political issues because of their impact on the markets and related risks but aim to do so from an apolitical perspective.

The approval rating of the current administration is a recent low arguably because policies have proven to be painful for the average voter. Our view is that voters typically (the major exception being times of war or civil strife) make an assessment based on their own narrow interests and the combination of inflation, increased interest rates, and embarrassments in Afghanistan have pressured the approval ratings.

Many of the policies of the current administration can be traced to efforts in addressing demands of Democratic party factions which are at odds with fighting inflation. For example, drilling for energy has been discouraged while President Biden is going hat in hand to Saudi Arabia and Venezuela in an attempt to encourage additional energy production.

While it is easy to criticize the current administration, the most vibrant segment of the Democratic Party has been the Progressives and there was a real risk of fracturing (in a manner that Ross Perot did in 1992). Nonetheless, House majority might slip (or change) and perhaps as a result some of the Progressives’ demands will moderate.

Many were surprised by the rapid rise in inflation and assumed it would ease in months (the term used was “Transitory”). Many believe the root cause was monetary expansion; that is, the supply of money exceeded the growth of the economy. While much of that is true, another component is the nature of the spending; the increased spending was not for an enhancement of productivity, but rather the additional spending was for COVID-related income maintenance, and Ukraine War spending. While the COVID expenditures have eased, the Ukraine War spending continues.

Some of the inflationary pressures are abating per the below charts on gasoline and copper prices from Trading Economics. 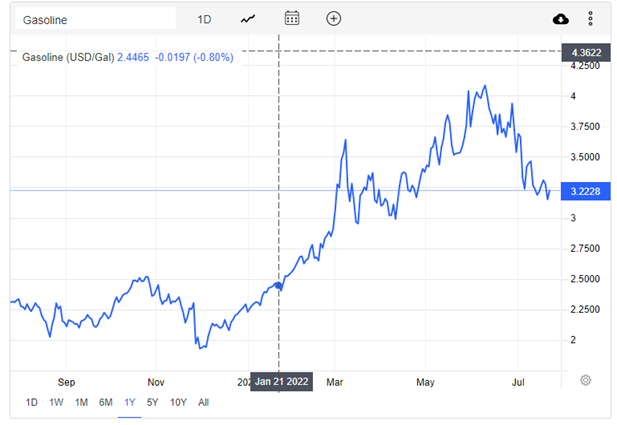 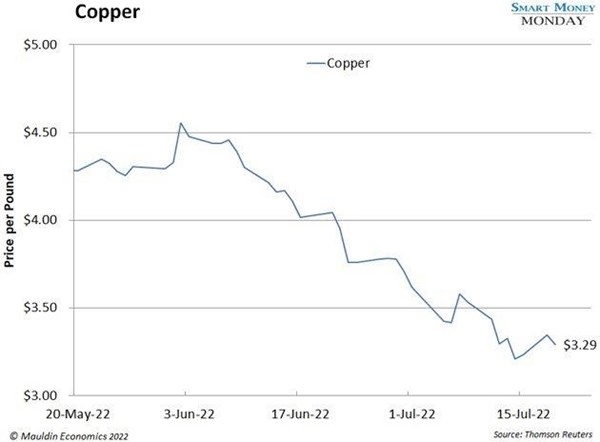 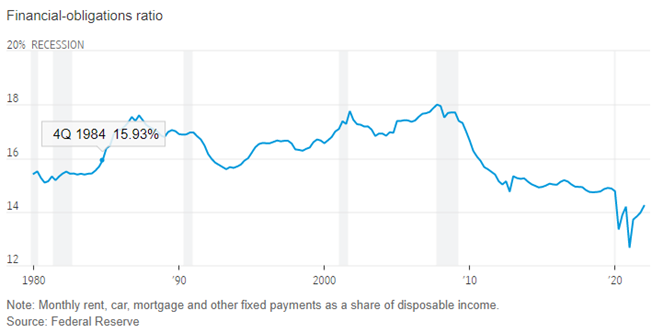 Furthermore, from a consumer perspective, the Financial Obligations ratio is fairly modest.

In the above section we mention the effect of the war on fiscal policy, but the risks are more extensive. As is often the case with wars, they continue and escalate until one side exhausts its and its allies’ resources. That path appears to be the case here whereby every month, the U.S. announces the delivery of evermore sophisticated and extensive weapons systems. As of several months ago, there was the understanding that the U.S would not provide fixed wing aircraft to Ukraine, but that now appears to be breached.

Just to be clear, the under-lying premise of Russia’s actions was apparently the closing of access points to Russia and control of some of the few natural gas sources in Europe. As can be seen below, natural gas prices in Germany are severely elevated: 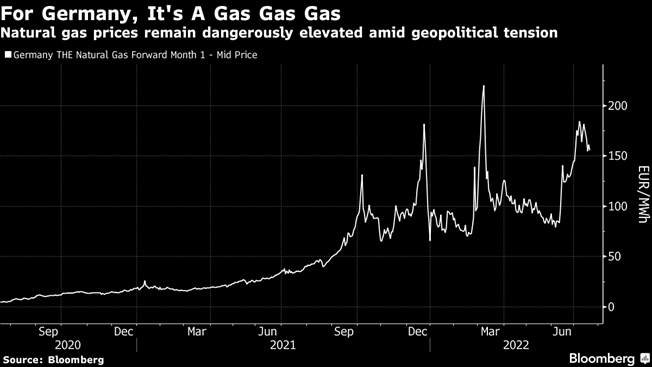 Meanwhile, for the U.S., the premise appears to be to weaken Russia such that it is less of a threat to NATO countries. By the way, China appears to be employing the U.S’s apparent strategy against the U.S., that is, where possible take actions to weaken the U.S.

Many are concerned that we are fighting the last war, (i.e., the Cold War with Russia) and that despite the bluster, Russia is a manageable threat. Particularly irksome is that the countries which are most threatened by Russia’s actions (i.e., Germany and France) are hamstrung by their dependence on Russian energy, and on a relative basis, are providing minimal support.

Although the Presidential elections are more than two years away, preparations are being made currently, and that has us worried. On the one hand, the current administration’s approval rating is low and numerous sources are questioning the age and fitness of Mr. Biden’s running for a second term. The normal process would be the grooming of possible successors by providing a platform and spotlight for preferred candidates. That is not happening as Mr. Biden is insisting on running for another term (prior campaign promises notwithstanding). On the other hand, Mr. Trump is crisscrossing the country with campaign rallies while the Jan. 6th commission is threatening criminal charges connected with his role in the event. Many are suggesting candidates such as Florida’s Ron DeSantis as having broader appeal, but Mr. Trump might be hard to deny given his resources and network. Furthermore, Mr. Trump might feel inclined to run given that the Democrat’s control of the House is likely to diminish or pass to the Republicans and Trump might feel compelled to vindicate himself.

Many market observers might prefer a new slate of candidates (such as Pritzker and Newsom on the Democratic side and DeSantis and Pence on the Republican side) but, with the exception of Obama, few are vaulted to the forefront without the support of the incumbents.

The decline in the equity markets has many worried that we are entering a recessionary period.

From an economic perspective, there is little doubt that China has made massive strides over the past several decades. The leadership’s belligerence might be masking underlying concerns. The COVID lockdowns have hurt many, but perhaps the larger issue is an apparent loss in faith in the attractiveness of the housing market. The failure of several large developers and the refusal of people to make mortgage payments on second homes has the potential for widespread breakdowns.

Residential housing market downturns are painful and have caused more than one recession including the late 1980s/early 1990s S&L crisis, and the 2008 Credit Crisis (because of the widespread impact).