Intransigent Inflation (Be careful about your holiday wishes) (December 2021)

The below quote from the WSJ describes a country which spiraled into misery courtesy of galloping inflation:

“Hyperinflation set off this most recent and precipitous descent. Beginning in __, unbridled government spending, uncontrolled monetary expansion and a collapse in tax revenues led prices to rise out of control.”(1)

Is it Weimer Germany, Turkey, Venezuela, Asia in the late 1990’s, the US in the 1970s, or possibly a prelude of what we might confront? For the curious, the above quote concerns Venezuela, describing how one of the richest countries in terms of proven petroleum reserves fell into chaos and remains so today.

Regarding the situation in the U.S., after years of bemoaning the lack of inflation, the country now has experienced the most rapid increase in prices in over 20 years:

The underlying causes are the usual suspects: rapid growth in currency creation and demand via fiscal spending referenced in our recent installment “Punch Bowls, Parties, and Perdition.” (2)

Now comes the hard part of deflating the inflationary bubble without triggering a widespread recession. Accepting the notion that all in Washington either starts or ends politically, Mr. Powell and his associates will be hard pressed materially to deflate the economy. Yes, there will be an increase in FED fund rates within the next couple of quarters. However, there are some tough mid-term elections coming up and recent polls indicate that control of both houses of Congress is in jeopardy. Hence, the path of least resistance is likely to be a tepid response in the form of a few rate increases and hope that inflation cools after 2024. Protests from the Friedman acolytes are likely to fall on deaf ears as the administration’s focus is likely to be on the midterm and 2024 elections.

Assuming that inflation will persist, and the administration is likely to have a tepid response, where does that leave the responsible institutional risk manager? Our view is that little will be done to address the underlying causes of inflation, and that the 2024 election will feature the issue. The simple fact remains that like many administrations, it is hard to take painful measures currently when the benefits are several years away. Furthermore, a major shift is likely to alienate those who have pushed for spending since the administration changed.

So there you have it: the current policies which have resulted in inflation are likely to persist and cannot easily be changed and therefore probably will not change. Hence, inflation near 5% is probably a safe bet.

Now for the hard part. Assuming our analysis regarding persistent inflation is correct, a review of one’s exposures is probably in order. At the top of the list in terms of “safe” exposures are those entities which can pass on increased costs to customers. For better or worse, the high-margin, high growth, tech-focused firms are typically those with the greatest pricing power. Unfortunately, most of them have been bid up in the recent past. At the other end of the spectrum is probably short-term, low yielding investments such as cash and near cash instruments. Assuming inflation is running at 5+% per annum, and short-term rates are near 1%, the loss after 5 years is over 20% (i.e., 4% times 5 years plus compounding). We have been here before, and the results are not attractive. Unfortunately, during periods of high interest rates, there are few safe harbors; the S&P 500 Index was halved as can be seen in the below Figure IV during 1975 to 1982 although it recovered thereafter. 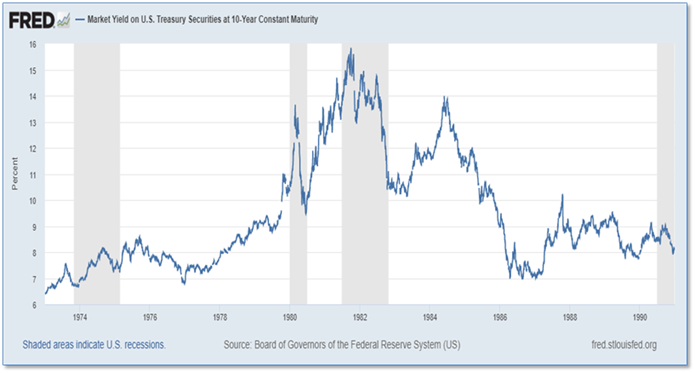 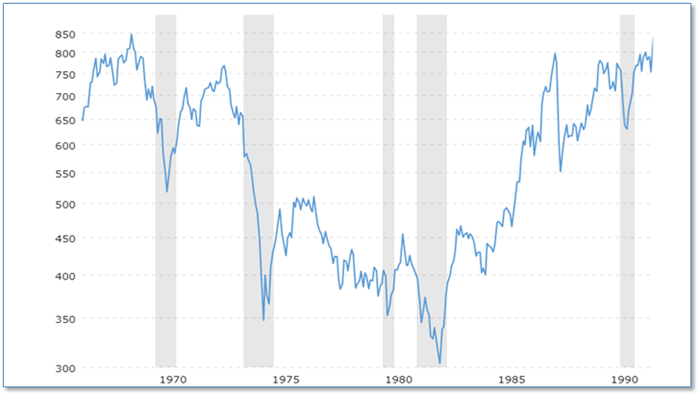 Another tempering item is the easing of the 3-year inflation outlook shown below: 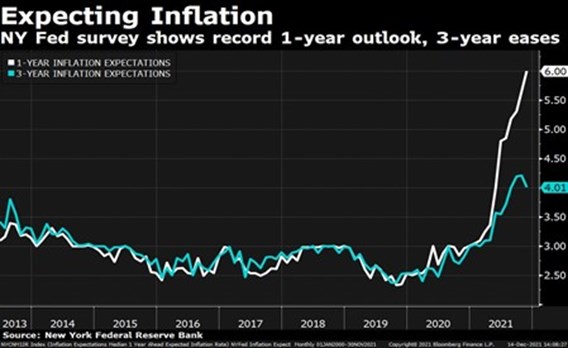 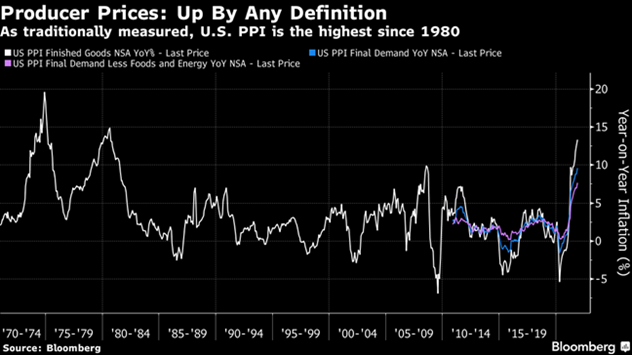 Regarding trends, we expect a slight rise to reflect inflation concerns: