Festering Wounds and Threats from Bread, Tea, and Onions (February 2022)

Inflation has bedeviled countries for ages and has the potential for bringing down governments.

While each of these items appear to be rather pedestrian, they have accomplished what armies could not. The rising price of bread precipitated the French Revolution, inflation via taxes on tea helped bring about the Colonial Revolution, and finally the price of the food staple of onions in India brought a change in the central government in 1980.  In all three cases, inflation drove people to the streets and governments from their capitals. Below is a telling passage from The 10 Rules of Successful Nations by Ruchir Sharma:

“Though the Revolutions of 1848 targeted European monarchies and followed the spread of democratic ideas on the continent, new research identifies spiking food prices as the main catalyst. In recent decades, Latin America has been a cauldron of inflation-driven unrest. Between 1946 and 1983, according to Martin Paldam of Aarhus University in Denmark, 15 governments fell in Latin America, and in 13 of those cases from Mexico to Argentina, the regime change followed a surge in the annual rate of consumer price inflation to 20 percent or more. Rising prices for wheat and other grains also contributed to the fall of Communism in the Soviet Union."

Those in well-paying jobs with material assets might be nonchalant to the impact of inflation given the fact that a primary asset of theirs, housing, has appreciated over 12% during the past year. However, a significant portion of the population has little savings, is concerned about meeting rent and food payments, and is feeling the pain.

Figure I - Hottest Inflation Since 1982 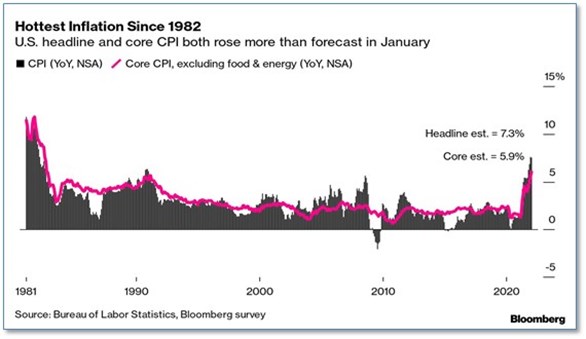 Enemy Identified; It is Us

Now that the problem has been identified, what about the solution? Unfortunately, it is rather elusive. For starters, the central banks own massive amounts of government debt, courtesy of “Quantitative Easing” and are likely to take significant hits if interest rates rise materially and assets are marked to market. (By the way, many believe the massive QE stoked inflation.) However, let’s assume there is no marking of assets to market and that the holdings are held to maturity. In that case, assuming interest rates are increased to quell inflation, (i.e., the usual response), then the more immediate threat is from rising funding costs.

Using Paul Volcker’s maxim that interest rates need to be increased at least to the level of inflation to “break” inflation, we are looking at rates north of 6.0%. To provide perspective, the below charts illustrate in the early 1980s, inflation (CPI) peaking above 14%, and the 10-year Treasuries peaking at 16%. 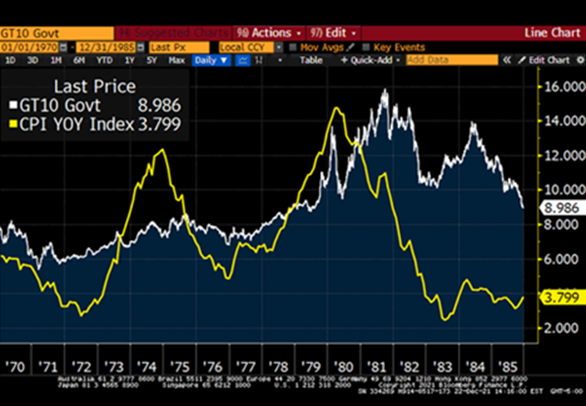 The impact is devastating; as can be seen below, Italy’s debt to GDP has risen steadily over the past several decades and is now approaching 160%. Mario Drahgi’s “Do whatever it takes” approach has kept Italy’s funding costs in check, but eventually reality is likely to strike. If Italy’s funding costs rose to 5.0%, annual funding costs on its approximately EUR 3.5 trillion of debt would be near EUR170B and its deficit would be near EUR300B.  (Costs rise even more with disruption such as a war over Ukraine or another COVID crisis.)  However, we do not expect this to happen as the EU has already issued pan-EU debt, which would likely continue and accelerate in the face of a crisis (the polite term is “mutualization” of debt).

Why Now, A Different Take

The trend in inflation and interest rates has been downward for the past several decades, and while one might question the competency of the current administration, surely, they could not be blamed for the quagmire we are currently facing. Our view is that action takes place at the margin, and that the COVID crisis was a catalyzing event. Time will tell how the current crisis will play out.

Assuming central banks are unwilling or unable to raise interest rates significantly, directly or by selling their massive holdings, higher levels of inflation are likely to persist. Therefore, focusing on those businesses which can pass on their costs is crucial.