Over time, the military action in Ukraine is likely to be viewed as a major preventable blow which was rooted in some convenient, but false assumptions. The impact on the markets is less than certain. The irony is that at the heart of the crisis is an item which many have proclaimed to be irrelevant in the modern world, and that is petro carbons in the form of petroleum and natural gas and facilitating market access to them (see below). With the intervention in Ukraine, Russia hopes to gain ready access to multiple world markets for its vast stores of petro carbons. Risk are generated from false assumptions. The current crisis reveals numerous of these false assumptions which are likely to be resolved over the coming years.

For the past decade, the assumption (false we might add) was that Putin was an aging dictator with a vast estate but on the verge of yet another collapse.
Commentary - Under-reported was a development years in the making, of Putin selling energy to energy-starved China, thereby providing Russia with the resources to attack Ukraine.

After centuries of warfare, Europe has been quiescent for the past 60 years, shaping its society to a form which many viewed as ideal, with moderate work weeks and a high degree of sensitivity to items which many view as noble and necessary for the long-term health of society.
Commentary – However, memories are short; forgotten are the horrors of World Wars I and II, which were brought about from the aspirations of aging dictators bent on expanding their reach and attaining a degree of immortality.

The concept of NATO (North Atlantic Treaty Organization) is that the Western nations would bind together to protect each other such that an attack on one NATO country would result in all of NATO coming to that country’s defense. In return, each country would contribute 2% of its GDP to defense and coordinate military actions. Unfortunately, the concept was flawed in the sense that many countries do not spend 2% on their military under the assumption that the U.S. would intervene in the event of an attack.
Commentary – While one could argue that Ukraine was not a NATO member, although they wanted to be a member, the attack on Ukraine threatens the EU, and the balance of the Western world.

The Western World believes that sanctions will bring to heel rogue nations.
Commentary – Unfortunately, the history is less than comforting. Sanctions have long been imposed on Cuba, Iran, Venezuela, and North Korea whereby citizens have suffered but leadership has remained.

The normal process for presidential elections is that two candidates slug it out over the better part of a year with a constant testing of their ability and durability.  During the most recent election, that was largely absent with one candidate being rejected as fundamentally unfit for the job by most of the media and the other waiting things out. The low approval ratings further hinder the current administration’s ability to be effective.
Commentary – There has long been a reluctance in the US to fighting Europe’s wars after the brutal experience in the first and second world wars combined with irritation with the refusal of EU nations to provide sufficiently to defense efforts.

The Western nations have believed that deficits are irrelevant and that they could continue to grow debt faster than GDP with little impact. (In the worst case, the central banks could purchase debt issued by the treasury by creating currency.) The appropriate sobriquet is Modern Monetary Theory or MMT.
Commentary – Our view is that the above statement is true, up to a point. The concern is that the normal description of bankruptcy is fitting: “it happened very slowly, then very quickly”. Japan and Italy are at the forefront on this issue.

What some consider the inept Afghanistan withdrawal raised questions about the effectiveness of the U.S.’s military, thereby probably encouraging Russia and China to become more “adventurous”.  In the opinion of many, an effective military is critical for a major world power.
Commentary – National priorities are in the process of being reset with a likely re-focusing on effectiveness.

While predicting the future is fraught with risks, we believe the attack on Ukraine is a watershed event and perhaps just the first of a series which might reset world order. The next obvious concern is Taiwan and possibly strategic alignments of other Asian counties. Perhaps on the positive side is the rebound of markets (shown below), the likely expansion of NATO and countries’ increasing defense spending. 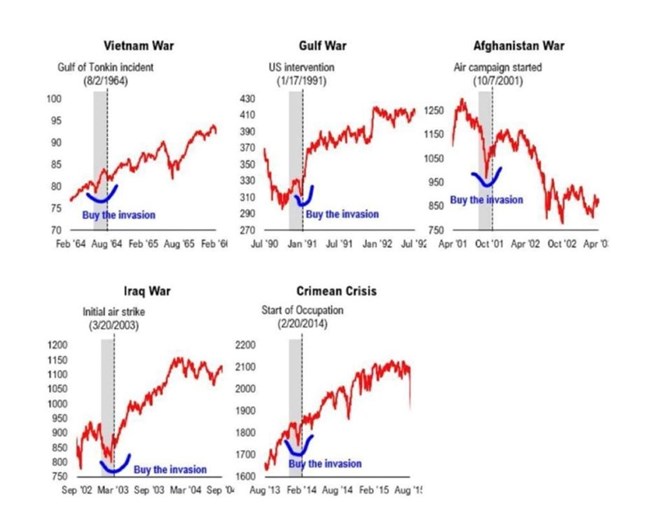