Deteriorating conditions in China are likely to have broad implications.

We have been watching events unfold in China and have become increasingly concerned. The most recent installments have been failure by another developer, Fantasia Holdings Group Co., to repay a $205.7 million bond which has reignited fears of widespread defaults among Chinese developers.

At the end of June, the aggregate interest coverage ratio of 21 big Hong Kong-listed Chinese real estate developers fell to 0.94, the worst in at least a decade, according to Reuters calculations based on Refinitiv data.
(https://www.reuters.com/world/china/chinese-property-developers-ability-repay-debt-hits-decade-low-2021-10-04/)

Compounding the troubles is the massive power outages seen below; given the fact that most of the economic activity is concentrated on the coast, the problem is particularly acute. 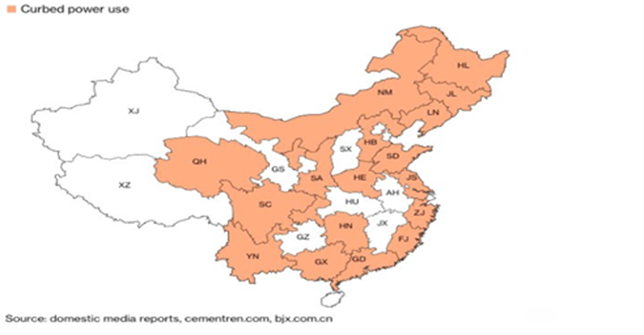 Why has the central government in China allowed a major firm such as Evergrande to default, effectively taken control of Alibaba, delayed the delivery of various goods, and outlawed energy-sapping crypto currencies? It is possible that these measures are simply efforts of the central government to improve the overall running of the country.  However, it could be something much larger which might impact all of us. Assuming that the central government has control of most aspects of the economy, it might suggest that the central government is making every effort to garner financial resources. The COVID-19 crisis has touched every country including China. However, in contrast to many other developed economies, China is dependent on the generation of foreign currency reserves via numerous manufacturing operations which historically have operated on thin margins and dependent on high volumes. With the volumes down and the margins still slim, cashflow might be pressed, particularly in the absence of large public offerings (which were curtailed by the SEC) and the shift in Hong Kong’s status in the financial markets.

China is not the first country that has gone down the path of low-cost labor, massive infrastructure growth, and a day of reckoning as investors realize the cashflow falls short of expectations. The US experienced problems with railroad bond defaults: “By the end of 1874, fully one-fourth of all US railroad companies had defaulted on their bonds, with the vast majority of these going into receivership.”

Similarly, Japan became the low-cost manufacturing capital post World War II. Japan progressed to the “Japanese Miracle” which culminated in a small area in Tokyo being supposedly valued at more than all the California real estate. With the bursting of the bubble, the “Japanese Miracle” turned into the “Lost Decades” which is illustrated by the elevated central government debt to GDP, and Japan is still making adjustments.

While the nationalist might cheer the possible weakness of a financial rival, some discretion is probably in order. Germany progressed from being essentially bankrupt during the Weimer Republic years to control of continental Europe a mere 10 years later. Likewise, China has massive resources at its disposal. Furthermore, despite the efforts of government, the ties among the global economies remain strong.