As conditions change, risks and opportunities change. While it might be difficult to anticipate shifting conditions, it is imperative to make adjustments. This installment addresses some emerging trends and possible outcomes.

Wars typically continue until one side is defeated or runs out of the means or will to fight. Following Ukraine’s surprisingly successful counter-offensive in East Ukraine, Russia may reconsider its invasion. The severing of Russian supply lines have resulted in significant logistical problems and material shortages. Without logistical support, an army ceases to be effective and is vulnerable to being over-run, which is exactly what is happening in the Donbas region and might happen to the northwest of Crimea.

It seems unlikely Putin will abandon his campaign, but is unlikely to see success with the current approach. Even if Russia can regain lost territory, it is likely that guerilla warfare will continue. The threat of Russia’s use of tactical nuclear weapons persists, though such action would ensure Russia would be a pariah state (like North Korea) for the foreseeable future. Another complicating factor is Russia’s cutting gas to Western Europe.

Our view is that the war might deescalate over the next 6 months perhaps with some assurances that Russia will not be attacked via Ukraine and some limited restoration of port access in Crimea to Ukraine and a restoration of energy flows to Europe.

Global supply chains disruptions will affect Germany more than most countries. Among the most vexing problems are the massive rise in natural gas and petroleum prices which not only is used in heating, and electricity generation, but is a key feedstock for a variety of products. Secondary and tertiary effects are likely to equal or exceed primary effects. 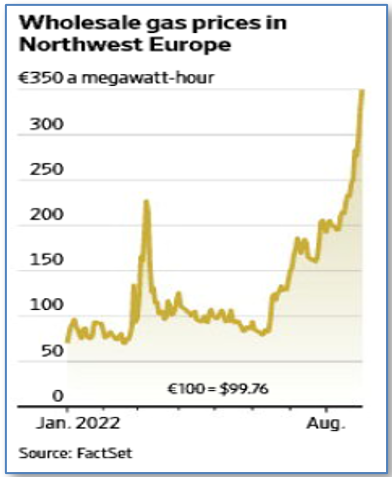 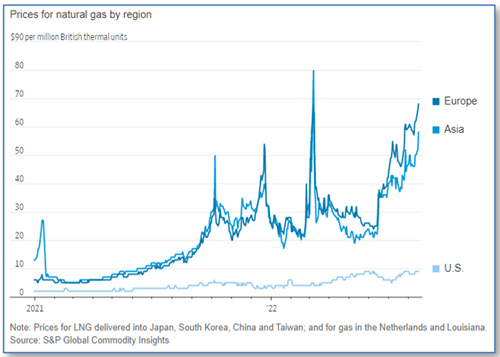 As shown above, both Europe and Asia have struggled with massive increases in energy prices whereas the US has seen more modest increases, probably because of its domestic sourcing. Compounding German energy woes is the massive technology shift underway in the auto and trucking industries. Electric vehicles are rapidly replacing internal combustion engines with the upshot being a slippage in Germany’s stalwart industrial leaders. The impact is massive as the wealth and prosperity stemming from the auto sector is hard to over-estimate. Assuming the typical luxury vehicle costs $60K, the typical family has two vehicles, and keeps them 5 years after which they lose half their value via a trade-in whereupon the cycle is repeated, then approximately $60K is spent over 5 years or $12K per annum per family. Multiply the $12K by 20M households and the economic value is $240B per annum. Perhaps the German manufacturers can recapture some of the market, but typically, when there are major technology shifts, the prior leaders seldom maintain leadership. Examples include IBM with PCs (Intel and Windows and now Apple assumed market leadership), Intel and chips (ARM-based chips are assuming leadership), database applications (Oracle and now specialized firms such as Salesforce.com are leaders), and data storage (AWS has replaced the old IBM mainframe-based systems).

We expect Tesla and some of the Chinese firms will continue to advance at the expense of old-line firms. Germany’s nationalizing the local unit of Russian oil major Rosneft is likely to further strain relations and reflects supply concerns.

The markets are struggling with the impact of inflation begging the question of the underlying causes, the likely duration, and the possible solution. As mentioned in prior installments, in our view, Steve Hanke appears to have the most cogent explanation of inflation which is in concert with Milton Friedman’s monetary based explanation (see Feb. 23, 2022 WSJ editorial By Steve H. Hanke and Nicholas Hanlon). An end to the Ukraine War would probably temper energy inflation, but Washington’s concern about midterms and the 2024 elections are likely to keep government spending high.

While concerns remain regarding the economy, we have been here before in terms of inflation, interest rates, and growth. Nonetheless, it will take time for investors to adjust.

The setbacks suffered by Russia in Ukraine should serve as a caution to China regarding its plans for Taiwan. However, there are numerous ways China can exert its influence short of military actions with the political process probably being at the forefront along with sympathizers being placed in key roles.

The shifting of some chip manufacturing to the States is prudent given the criticality of the industry and the vulnerability of Taiwan.

Perhaps the highest impact concern currently is Putin’s usage of nuclear weapons to offset recent losses. Conversely, if an armistice can be arranged and energy flows are restored conditions should rapidly improve.