There is little that has not changed over the past 90 days such that many market participants are only beginning to grasp the breadth and depth of the changes.  On an optimistic note, it appears the brunt of the recent COVID19 infections are behind us (at least domestically) and that most of the economy is beginning to open-up. On the negative side, at least from the perspective of major investors, interest, taxes, and possibly inflation rates are higher which is likely to create headwinds for most businesses. Bell weathers for the change are (i) prices for copper, which is used in many manufacturing operations, particularly housing, and (ii) overall futures prices. In the case of copper, as can be seen in the below chart, prices are at a ten- year high:

Turning to overall commodity prices, typically future prices of commodities are greater than current prices mainly because of the cost to hold inventory. When current prices are greater, the term “backwardation” is used to reflect the situation, which is normally caused by spiking current demand.

Moving on to inflation, as can be seen below, expectations have risen sharply over the past year and a half, rising from less than 1.0% to over 2.0%. A major issue is whether inflation will be transitory as the FED is currently expecting post-COVID or whether it will be more permanent.

As far as the major obligors are concerned, the hope and expectation is that any inflation will be transitory. Count Italy and other heavily indebted countries in this category. The below graph of Italy’s debt relative to GDP at 160% is at a post war high and in the opinion of some might be unsustainable without the assistance of the EU. Simply put, Italy cannot afford any increase in its funding costs. (More on this subject below.)

Regarding domestic interest rates, the theme of declining rates appears to be intact with little relief for fixed income investors (other than the private markets). While recent rates are up a bit nearing 2.0%, they are still down massively over the past 40 years.  (Figure V sourced from Macrotrends.)

Likewise, as can be seen from the below graph, spreads for CCC bonds ae near ten-year lows, thereby providing little comfort to fixed income investors. 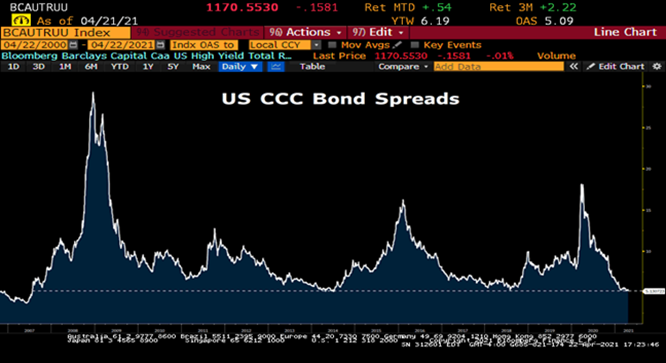 On to the equity markets, while based on historical earnings, prices are elevated, current levels look more reasonable using projected earnings. In fact, the market leaders FANG stocks reported record earnings for the most recent quarter despite the travails of COVID. The below chart provides some perspective.

One last point before moving on to our normal charts and that is the massive pain being experienced by India from new variants of COVID which appear to be attacking all ages and are spreading rapidly despite countermeasures. As of several months ago, India appeared to have escaped the brunt of the scourge but appears now to be a leading hot spot along with parts of South America.

Taking measure of the recent changes, we have organized the below chart which might be helpful:

Assuming we have properly identified some of the major forces driving the market over the next couple of quarters, it appears the forces leading to increased inflationary pressure outweigh those on the deflationary side. Hence, perhaps the recent rise in interest rates is here to stay.  A major assumption in the above chart is whether the current administration is going to continue its approach; our view is that despite the protestations of the Republicans, the current administration is likely to be remembered as one of the most progressive since FDR and will succeed in advancing a variety of pro-spending legislation. For those Milton Friedman followers, the expansion in currency beyond the growth in the economy, normally results in inflation. In retrospect, the first few quarters of 2021 might be remembered as a major inflection point in the economy.

In an effort to provide some context to the current situation, the rise in petroleum prices (per Figure X, WTI up from a low of $20 to $61.50) and the rise in housing (per Figure XI, housing starts have been rising over the past twelve years and are currently near 1.58M per annum). (Figures X through XIII are from Macrotrends.)

As if on cue, yields have jumped to reflect the optimism rising over 100bps over the past six months. This is the moment we have all been waiting for – a pick-up in inflation and with it, bond yields!  The entire investment community has been laboring under negative or barely-there coupons and the past several weeks have provided some hope finally, yields would provide a modicum of return. In fact, it doesn’t even have to be a real return (i.e., nominal return less inflation).  Anything would be better given the massive amount of negative yielding instruments in the market.

Is it real?  Is it sustainable?  And most importantly, how might we adjust exposures? While all this might be encouraging to a yield bull or a treasury bear, as usual, we encourage some perspective. For starters, yields have a long way to go before they begin to approach more normal levels. Assuming inflationary expectations drive interest rates, it is worthwhile to focus a bit on inflation. The godfather of inflation studies, Milton Friedman preached that at its core, inflation was caused by excess money creation. By almost any measure, over the past several years, money creation has exceeded GDP growth, and yet inflation has remained quiescent. With the rise in most interest rates over the past month, is it possible that Friedman acolytes might be vindicated?

The problem with Dr. Friedman’s analysis is that it has been and for better or worse, for the past 15 years, it has been and remains wrong.  Despite the massive money printing among the developed countries relative to GDP growth, and of course the corresponding drop in the velocity of money, to date, inflation has been low, and based on the five year forward expectations, will remain low. As can be seen below, the expected inflation rate (on average) over the five-year period that begins five years from today is 1.91%.

Might Dr. Friedman’s theory remain sound, but it is just a matter of time before the inflation monster rears its head. While possible, there are a few items to consider before jumping on the new inflation bandwagon.  First is the eight-hundred-pound gorilla in the form of the central banks which have had a tendency of buying anything moving in an attempt to keep rates down; it is unlikely that the central banks are going to reverse course soon. Second is a review of the major expenditures for the typical consumer to determine whether costs are going to increase substantially. On the housing front, the move away from central offices and towards telecommuting increases housing starts, but perhaps at the expense of inner city demand. Moving on to transportation, with the emergence of new technologies and increased competition, transportation costs are likely to remain under control. Lastly, clothing, food and education are unlikely to experience major rises over the near future. Hence, on balance, the recent rise might simply reflect the waning of the COVID19 crisis, the Washington chaos settling down, and apparent rebound in the housing market.

In an effort to offset the travails of COVID (and assist with re-election campaigns), nearly every major country’s central bank has effectively printed currency and injected it into the economy.  Most banks are buying securities under the guise of “Quantitative Easing” which of course has the effect of suppressing interest rates and causing investors to invest in riskier assets. Additionally, many developed countries are distributing checks to all citizens below a certain income threshold in the hopes of stimulating the economy. (Note, this is not unemployment insurance but rather a payment to all citizens.) In fact, the largess is not limited to the U.S; the latest round supposedly included $4B for Central America. Lastly, with lingering effects of COVID, it is probably safe to assume that more distributions can be expected and recently there was a news story suggesting that all mothers be provided payments of $2,400.

So where does that leave us? Time will tell, but our suspicion is that for every action, there is a reaction. If one country is printing currency faster than others, the profligate’s currency over time will slip, adjusting for differentials in productivity and investment flows. Unfortunately, some countries are rapidly approaching an inflection point whereby it is increasing obvious that debt cannot be repaid via normal sources. Japan appears to have reached that point long ago but has been saved by the low need for external capital.  Italy appears to be approaching the event horizon (i.e., the point in a black hole where nothing, including light cannot escape) but currently has the support of the ECB (see the return of Mario).  All this discussion is interesting but perhaps the more relevant point is market sentiment; one can be right on the fundamentals but wrong on the timing.  Periodically, the markets deliver such a reminder with the latest example being the burning of short sellers of a few high-profile stocks. Nonetheless, normally the fundamentals win and therefore it may be wise to bear them in mind but to watch the madness of the crowds.

Credit Front - The areas which are likely to experience the greatest stress are listed below (see our Industry Review for additional information):

Regarding interest rates, the EU countries and credits cannot afford significant increases in rates. The periphery EU countries (e.g., Italy) are likely to see continued pressure because of increased credit quality concerns. Regarding trends, we had expected a slight rise in rates as economies recover but the market turmoil, tepid growth and central banks’ money creation are depressing rates.