Western countries pride themselves as having a superior way of life and believe over time, others will understand and accept that it is in their interest to join the developed world to share in the prosperity. There have been many manifestations of this notion (hubris is probably more fitting) and most of them have not ended well. Included on the list of well-intentioned but ill-informed ventures are the Crusades, the marches on Moscow in both 1812 (under Napoleon) and 1941 (under Hitler), Vietnam, and Afghanistan (under Russia (1979-1989) and under the US (2001-2021)). To be sure, all started with the assumption that the superiority of weapons, resources, and culture would quickly result in the desired outcome. Lost in the calculus was an appreciation of the difficulty in effecting change and in turn, how supposed advantages are either blunted or completely offset in nontraditional terrains and climates. Sobering are the images of the retreat (and in the minds of many, the defeat) of a powerful army by a rag-tag group of irregulars armed with small weapons and jerry-rigged pickup trucks. In retrospect, while there was no battle the US Army could not win, there was no war in the area they could win. While there was little doubt that the US and its allies had to exit, there continues to be substantial angst about the method of the exit and whether it has broader implications. Our suspicion is that this misadventure will be analyzed for years and will be mentioned regularly even in cases where we should engage. What would be especially galling for State Dept. and Dept. of Defense officials would be China’s making peace with the Taliban and exploiting the country’s considerable mineral wealth and in turn benefiting both China and the Taliban.

Continuing with the Broken Dreams theme, the rout in Chinese stocks continued this week as a result of the central government’s effort to reshape China to their view of the world. Whether recognized or not, there has been a sea change in the investment landscape in China. Previously, the underlying assumption was that China would see the benefits of Western-styled democracy and would, over time, open up their society to reap the rewards of a democratic, capitalistic-based system. Unfortunately, only part of that dream has come to pass. Yes, the country was opened up and is now considered an essential part of most global supply chains. What has not happened is any sort of liberalization. In fact, if the latest actions are a guide, the government is in the process of reshaping various industries to comport to a view of the future. While US Treasury officials fret over a minor break in the markets, Chinese officials appear to be eager to inflict pain on various sectors to remind the business community of where the ultimate power lies.

For those individuals who grew up during the Great Depression (i.e., many of our parents or grandparents), the underlying assumption in many actions was one of self-sufficiency. If one could not afford something, one did not buy it, debt other than a manageable mortgage on one’s home was to be avoided and living within one’s means was imperative. With the passing of many of the Depression generation, also passing are the philosophies which had served them well. Taking their place is a generation which has a completely different view of the world which has widespread implications for anyone involved in finance. Before proceeding, we believe successful investors are best served by not passing judgement on the relative appeal of various generations or groups, but rather to understand shifts and implications on investments. Regarding the Culture Wars, it is becoming increasingly clear that the old rules of finance are being set aside to better fit the views of the rising generation. For example, it is doubtful that during the later part of the 20th century that the Executive Branch would impose a multi-month moratorium on evictions and student loan payments while simultaneously providing massive support payments to citizens. The recent extensions of both programs are indications of the shifting priorities. Another manifestation of the same phenomenon is the rise of the MMT concept (Modern Monetary Theory) which at its core suggests that deficits are irrelevant; it is doubtful that such a theory would gain much traction with the Depression era generation. Regarding the relevancy for investors, the impact of the new approach is becoming painfully obvious. For example, for landlords, a six month or more curtailment of some rental income without the curtailment of related expenses/payments such as mortgage payments, property taxes, upkeep and other payments has caused havoc for some. On the student loan front, a multi-month curtailment of cash payments is likely to cause massive disruption for some. Perhaps the larger issue is whether the recent actions represent a permanent shift in under-pinning of the economy. While too early to know, it is probably safe to assume that whoever is in power in Washington, there will be a continued shift in long-accepted contractual arrangements. Our expectations are that the forgiveness of student debt is likely to be on the agenda in the near future, and after that, some housing subsidy or advances for home purchases. Perhaps parts of the EU are the template of what’s to come if there is a continuation of current trends.

The past couple of weeks have witnessed some material declines in China-related stocks based on Beijing’s crack down on various sectors of their economy. Actions include a $2.8 billion antitrust fine on Alibaba, suspension of Ant Group’s $34.5 billion IPO, a cybersecurity probe on Chinese ride-hailing service Didi, and a review of 34 companies including Tencent and Byte Dance regarding anti-monopoly rules. Recently profits for educational firms have been prohibited, along with gaming for children 12 years of age or younger. The upshot of these actions was a $1T decline in the value of US-listed, China-based firms. So, what has changed, and more importantly, what are the possible future actions? From our perspective, China is now less concerned about investors (both domestic and international) and more concerned about maintaining control (particularly in the tech/ social media sectors) and adjusting society to the mold which it believes best fits the country’s needs. Regarding the question of why now – perhaps Xi has a greater degree of autonomy than recent prior administrations and perhaps it also reflects the pending delisting of some Chinese companies from US exchanges based on revised accounting independence rules. Simultaneously, the old practice of preventing major bankruptcies appears to be gone with the problems of Evergrande. Most importantly, for the areas which might be hit next, our view is that the casino firms are vulnerable as are any areas considered strategically important.

Regarding trends, we had expected a slight rise in rates as economies recover but the market turmoil and central banks’ money creation are depressing rates. The below chart is particularly disturbing.

As can be seen below, there is a wide range in yield expectations: 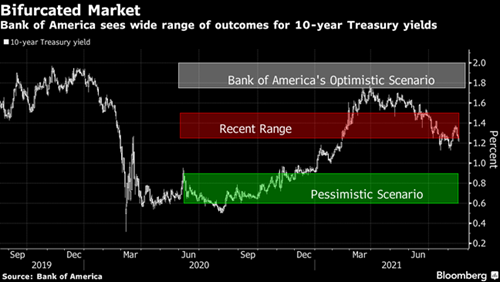