Overview – We aim to provide our readers with an intellectual framework for evaluating the major factors driving the institutional investment market. The report seeks to address complex issues but in an understanding manner.  Lastly, we will only issue a report if we have something cogent to write.

Driving Inflation – Other than the current period, since World War II we have had two major events over heightened inflation:

Post World War II (Supply Restrictions) - which was driven by the lack of production (many producers were destroyed by the war).

The 1970’s and early 1980’s (Demand Driven) - driven by the entry of Baby Boomers into the workforce and the creation of households. The Vietnam War also absorbed significant levels of resources.

Current Situation (Supply and Demand Driven) - as of two years ago, economists and central bankers were hoping to see an inflation rate of 2% (rates were running near .5%) whereas currently inflation is running in excess of 6%.

Underlying Causes, Extent and Durability - the major questions regarding inflation are the underlying causes, the extent, and durability.  Regarding causes of inflation, perhaps the best way of addressing the issue is identifying why inflation has been low over the past several decades. Below are some possible reasons (and comments on current conditions):

Globalization – as a result of low-cost transportation, technology, and increased education, products and services could be sourced internationally. (For a variety of reasons, globalization is being questioned.)

Technology – has increased productivity. (Our view is that productivity will continue to improve.)

Productivity of the Baby Boomers – the bulge of the baby boomers has driven much of the economy over the past several decades. (The retirement of Baby Boomers will reduce the workforce; we are now faced with labor shortages.).

While market observers can get caught up political-related discussions, the soundest explanation appears to be the growth of currency (and related accounts) in excess of the growth of the economy. As mentioned in a prior Risk Commentary, authors Steve H. Hanke and Nicholas Hanlon wrote an interesting article in the WSJ editorial section regarding inflation: “Powell Is Wrong. Printing Money Causes Inflation”. The authors support inflation expectations of 6 to 9% and elaborate: 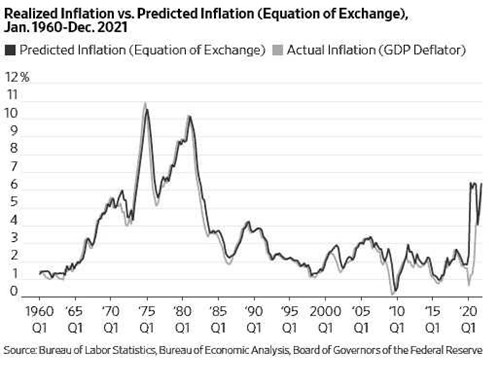 Many observers use the Volcker era as the template for breaking inflation; higher interest rates increase the cost of doing business and thereby tampers down demand and in turn reduces inflation. However, as mentioned in the next section, there are limits on the interest rate front.

Typically, currencies move very slowly which has not been the case recently as indicated in the below graphs from MacroTrends: 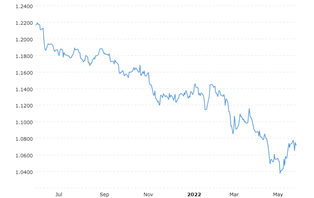 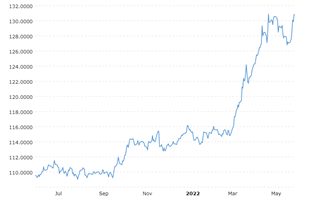 Our view is that the moves reflect among other factors, the recent and growing spread in interest rates in the U.S. compared to other major countries. As of twelve months ago, Europe had a massive number of negative yielding instruments. One might question why interest rates have been kept low, our view is that it has been a matter of need; some countries such as Italy cannot stomach significant increases in rates. Italy’s debt to GDP is in the area of 150% and its annual deficit is approximately EUR35B. A rise in interest expense from 1.9% to 3.8% would cost an additional EUR55B on its EUR2.6T of debt.

There are obviously other factors that drive currencies (e.g., Balance of Trade and Payments), but turmoil, which we are now experiencing, drives a flight to quality. The collapse of the crypto currencies also increases the dominance of the dollar.

The Ukraine War has resulted in numerous surprises including the success of the Ukrainian fighters and the non-success of Russian fighters, the solidarity of the EU and the level of sanctions. There has been a shifting of the view of the war whereby the major view is that Russia considers its attack on Ukraine as merely a step in Russia’s attempt to plug the gaps which provide access to Russia. This notion is the basis behind many Western nations providing support to Ukraine. There are a few conundrums which are likely to be resolved over time such as:

Food Crisis – the removal of Ukraine and Russia as food and fertilizer sources will produce a shortage across many countries.

European Energy Sourcing – fighting a country while providing the country with funding is normally counter-productive. Central and Southern European countries might be especially vulnerable.

Putin’s Judgement – Putin will not live forever and it is fair for Russians to question the wisdom of recent actions.

Russia’s Obliteration Strategy – the modern world can understand Russian concerns about the integrity of its borders, but cannot stomach the obliteration of cities, which appears to be the operative approach.

India’s non-support – India has become a major purchaser of Russian oil and is likely to face increasing pressure from those countries opposing Russia’s actions.