The purpose of this publication is to address those items that are likely to have the greatest impact on institutional investor risk managers. Our aim is to explain underlying causes for recent developments and where possible, predict outcomes.

In business schools, students are typically taught about the efficient frontier, that is the benefit of diversifying and adjusting one’s portfolio to achieve the maximum return with the least amount of risk. Rarely taught is the fact that frontiers or goal posts shift depending on the economic climate.

We are in such a period now with many managers attempting to “de-risk” their portfolios at perhaps the worst time. Blackstone recently received substantial redemption requests, thus necessitating a hold on redemptions. Depending on one’s view of interest rates and cap rates, in retrospect, these redemption request might be viewed as ill-timed with a fitting description of selling at the bottom. This development is bound to cause major disruption for the manager and investors. While there is little that can be done now, perhaps more attention is needed from all parties to address this phenomenon of shifting views.

Interestingly, just as there is no ill wind that blows, some savvy investors have made a habit of seeking and benefiting from market disruptions. The Tisch family purchased tankers at $5M each in early 1982 when the scrap value was near $5M. Soon, the same tankers were trading at $50M. Likewise, the head of a major trading firm generated the seed capital for his firm by visiting the various betting venues, assessing odds, and placing bets based on statistics rather than emotions, thereby locking in dependable gains.

Sophisticated investors anticipate real value and reactions of fellow investors. In the words of successful investor/ economist John Maynard Keynes, it is of little importance which is the prettiest young lady in a beauty contest, but rather which one the judges view is the prettiest. Below is a short description of the shifts.

On the positive side, our view is that the 18 months of disruption might be ending and that inflation and interest rates will moderate. With it, the bulk of investors will revert to decisions being driven by more return assessments rather than risk avoidance. An early indication of this is the narrowing of spreads on the tranche side versus the asset side. Below is a summary of all domestic CLOs with the growth in asset yields exceeding that of tranche yields. Reach out to marketing@egan-jones.com if you would like to receive our monthly summary report. 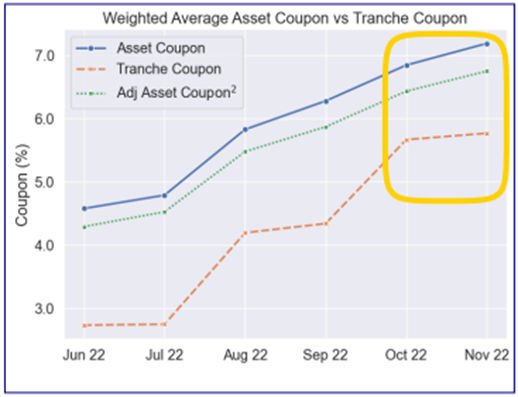 We closely follow development in Ukraine because of the impact on global markets. Not only are massive amounts of money being expended, but if the war ends, some of the major problems facing the markets will be addressed: energy will flow in Europe thereby further moderating energy prices, both Ukraine and Russia will resume their roles as massive grain, energy, and fertilizer exporters, normal trade will resume, inflation will ease, and interest rates will normalize. A retaking of Crimea via the cutting of supply lines would likely alter the perception of Putin. Furthermore, Russia is depleting its arms stockpile, which is likely to raise concerns that Russia itself becomes vulnerable to attack, although such an outcome to be unlikely in the short-run. A more likely event is that if Ukraine drives Russia out of Crimea, the reputed entreaties to Biden regarding war negotiations are likely to become more frequent, and the war’s ending might become more viable.

There is little doubt that XI Jinping has made significant policy mistakes recent particularly regarding the lockdowns and the alienation of its major trading partner, the U.S. Many have applauded the ingenuity of the protestors with the lack of any message on their protest banners, thereby sidestepping the normal prohibitions against protests (how can one be arrested when there is no specific protest). However, for those who hope that the actions might result in a change in government, we would provide a note of caution: per Machiavelli, regime changes are difficult particularly in those cases where the government has tight controls over the population. We expect thousands of arrests and continued easing of restrictions.

Despite our views on the difficulty of regime changes, one item which should remain front and center is the possible vulnerability of credit quality of the country. Lockdowns, reshoring of supply (Apple is the latest to announce a shift away from China ), real estate over-building and a rise in global interest rates have chipped away at credit quality. As mentioned in a prior installment, if GDP has been overstated over the past several years, the level of reported and guaranteed debt might become burdensome.

Conditions continue to deteriorate across the world’s factories and ports even ahead of the peak holiday season, Bloomberg’s Trade Tracker shows. All four sentiment gauges were below average as shipments decline, manufacturing activity declines and companies brace for worse to come. The gloomy outlook has been exacerbated by everything from higher energy bills squeezing customers in Europe, weaker currencies in Asia boosting raw material costs to strikes by truck drivers in South Korea.