With the successful launch of Bitcoin ETFs comes an underappreciated threat to the current financial system.

As of 200 years ago, THE premier way for transporting people and goods from the East coast to the Midwest was via the Conestoga wagon, a well-built, well-regarded, tested staple for the arduous trip. The wagon was considered to be the only choice for those attempting the journey and as a result, many thousands were built. Given the brand’s acceptance, one would assume that regardless of the transportation format, Conestoga would remain a leading player. In retrospect, it was a silly assumption. The advent of trains, and later, self-propelled, primarily gasoline-powered vehicles quickly over-ran Conestoga, relegating the product to the fire pit or museums.

One might ask why the makers of the wagons could not see the changes coming and shift to newer and better platforms. In our experience, with major technology shifts, the incumbents rarely thrive. Many examples exist in the business world even for supposedly well-managed, technology-driven firms. For example, Intel is rapidly losing its leadership in chip making with better, more efficient ARM designs and more advanced circuits. As of 2020, Intel still has not shipped a 10nm server chip while its competitor, TSMC is mass producing 5nm processors. (This is despite Andy Grove’s regular admonition “Only the paranoid survive.”)

While historic events are hard to recognize while they are happening, one such event occurred last week with the successful launch of a crypto-currency-based ETF.

The relevancy is multifold in the sense that crypto currencies (CC’s) are now an accepted product, the launch is likely to spur many more, and demand for CC’s is likely to rise. Traditional investors have long stated that the CC’s have little inherent value and are likely to implode. While such arguments appear sound, they ignore the fact the CC’s provide convenience. For example, when in airports or stadiums, most of us are happy to pay a stiff premium for food and other items because of the convenience factor. Likewise, a $100 bill has little inherent value other than its ready acceptance by others, that is, its convenience.

While the above arguments are now probably understood by most investors, what is NOT widely understood is the possible implications arising from the growing acceptance of CC’s. In short, CC’s have the potential for faster, cheaper, better, which in many industries translates into a killer application (or “Killer App”); our view is that CC’s have the potential to restructure many of the financial services areas. 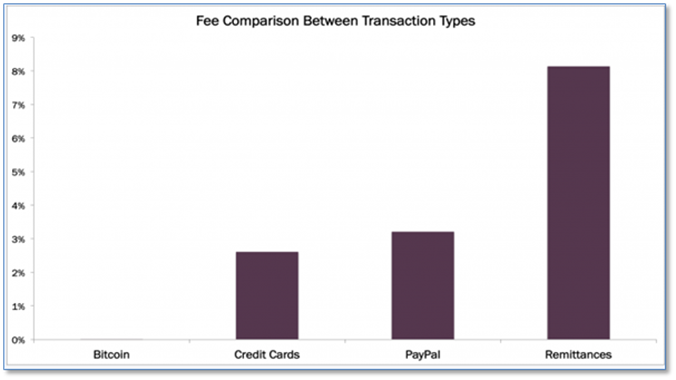 The above chart was provided by Elizabeth Hamilton of Ark Invest who writes:

The relevancy of CC’s is the massive cost advantage such a system provides. For example, a digital wallet is the means for keeping track of digital currencies currently, and with the growing acceptance of CC’s, digital wallets’ number and size will grow. Over time wallet providers are likely to offer most financial services such as checking accounts, credit cards, savings accounts, investments, insurance, mortgages, loans, etc. The below chart compares the cost of customer acquisition for the traditional credit card firms (i.e., mostly banks) to the digital wallet providers. As can be seen in the below chart, whereas for credit cards, the cost is $250 to $1,500, for the wallets, it is a mere $20. Furthermore, firms such as Square and Venmo have the potential to further undercut the traditional card Visa offers via their direct relationship with retailers and customers whereas Visa typically operates via banking networks at both the retailer and cardholder level. At the end of 2020, the number of J.P. Morgan Chase deposit account holders totaled approximately 60 million while Cash App’s and Venmo’s Annual Active Users (AAUs) scaled to 59 million and 69 million, respectively. 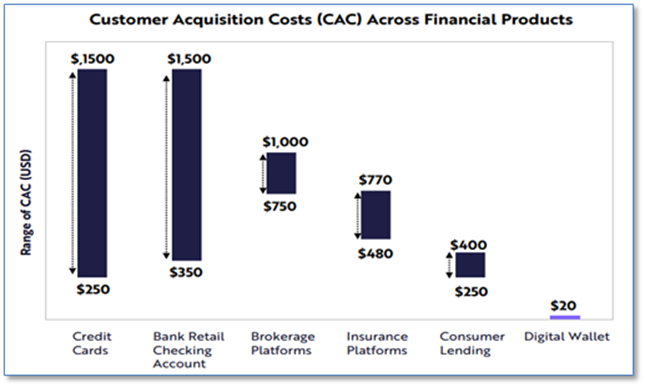 Perhaps a leading indicator of the trend is a cost comparison of the transaction fees for Western Union compared to bitcoin as indicated below: 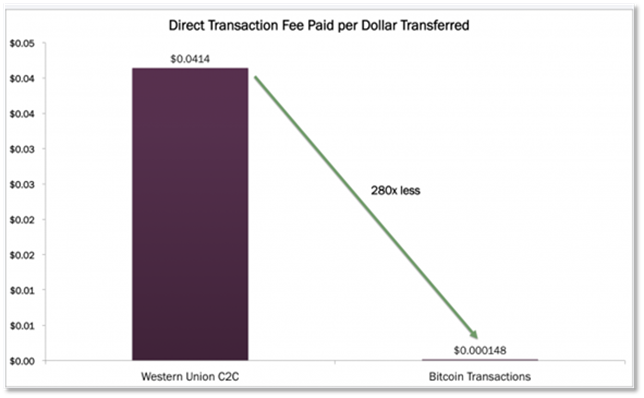 Regarding the implications of this, time will tell. One should expect the CC’s to have significant growing pains such as regulatory hurdles, power usage problems, black market concerns, and others. However, the “better, cheaper, faster” qualities are likely to remain while the problems are addressed, until CC’s are replaced with a better system. Regardless, the landscape is likely to shift dramatically over the next decade.

Regarding trends, we expected a slight rise to reflect inflation concerns: