The Markets can provide a cruel retort to the best intentions and best laid plans, again reminding us of the limits of our power.

With a focus on the ills of global warming, there was general consensus that we should move away from fossil fuels in favor of more sustainable sources of power. Respond we did, with major institutions jettisoning their energy holdings, banks refusing to lend, and governments restricting permits for the development of additional carbon-based resources.  The thought was and remains that the markets will adjust by shifting to more sustainable sources of power.  In the meantime, the run-up in coal and natural prices provide cold comfort.

Prevailing wisdom is that the rise in carbon dioxide has caused harm to the planet as evidenced by a rise in temperatures, a rise in sea levels, and overall harm to the environment. The counter argument is that global warming and cooling have been occurring for eons and that if in fact there is more Co2 in the air, plant life will grow faster and the planet will adjust. Such climate change skeptics may also argue that perhaps the far North and far South would benefit from slight increases in temperature.

Regardless of one’s personal views, the Global Warming side is prevailing, big energy is being viewed in a manner similar to big tobacco, and the impact is just beginning to be felt.

We experienced a taste of the problem with the Texas energy crisis within the past year. Ironically, Texas, the birthplace and epi-center of the modern energy sector, suffered the unthinkable: a massive, sustained power outage. As a result of freezing temperatures  and overcast skies, the wind turbines became inoperable, solar panels under-produced, and the energy grid collapsed, thereby depriving citizens of electricity when they most needed it. Granted, freezing temperatures in Texas are rare, but it is inconceivable that the system failed on a wholesale basis when most needed.

Winter is several months away in the Northern Hemisphere and already we are feeling its bite. Adding to the woes, China has now ordered utilities to secure energy sources regardless of price. (Sounds like coal will remain in a bull market for the next couple of years.) The below graph illustrates the rapid rise in coal prices, which might continue to rise until inventories are rebuilt.

Figure I: the price of coal (US$/metric tone) 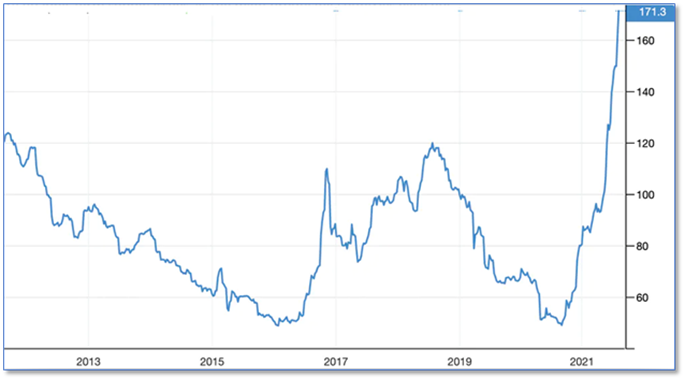 Given the choice of letting people freeze to death versus incurring the wrath of the Davos crowd, we expect a tempering of clean energy efforts until more dependable sustainable sources of energy can be found. In the meantime, traditional energy sources are receiving a (possibly temporary) reprieve. Ultimately, we expect cleaner energy sources will prevail.